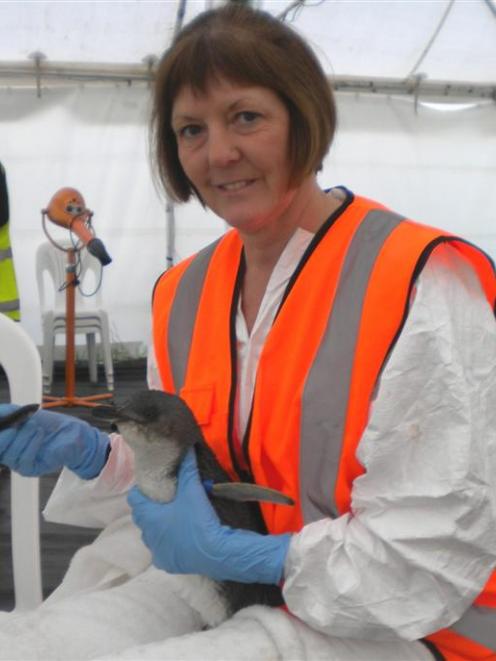 "We didn't really see much of the community. Literally, we left our hotels at 7am and most of us didn't finish until around six," she said.

Her day at the facility near Mount Maunganui's Baypark stadium would start in a clean tent with 80 birds. Each would be tubed, fed whole anchovies, allowed to swim for at least 30 minutes a day, then fed again in the afternoon.

"Feeding penguins is more complicated than most people think. Clean feeding is very important because the oil from the fish can degrade thefeathers," Ms Downton said.

When oils combine with the feathers, the waterproof seal is broken and the bird can become waterlogged, sink and drown.

Ms Downton and Mr Wolverson arrived in New Zealand from Scotland six and a-half years ago and set up their Doc-licensed rehabilitation clinic in their backyard two years later.

Between June 2010 and June 2011, 62 yellow-eyed, blue and crested penguins had been spotted by Mr Wolverson and transported to the property, with the number cared for at any one time peaking at 22.

Each of the more serious cases received free care from Vetlife, which tended to have a high turnover of veterinarians keen to learn more about treating penguins.

That peak of 22 birds paled in comparison to the situation in Tauranga, where 1844 birds have been confirmed dead and slightly more than 300 blue penguins are still being kept as a release plan is prepared.

"It's sad to see penguins in that sort of state but I saw them at their best. They had already been cleaned up by the time I got there," Ms Downton said.