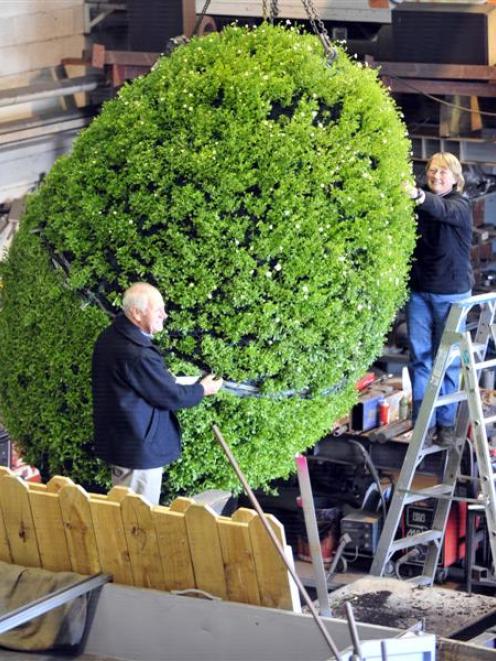 Putting the finishing touches on a Dunedin City Council giant flowering rugby ball in Dunedin yesterday are (from left) council sports fields and facilities officer Harold Driver and Delta gardener Joneen Chalmers. Photo by Craig Baxter.
Not many rugby players would likely associate their decidedly masculine sport with delicate white flowers, but how could anyone not be impressed with a huge, five-tonne rugby ball covered in them.

When looking for a novel and stimulating way to mark the Rugby World Cup, the Dunedin City Council came up the idea of a gigantic flowering rugby ball.

The 3m-high, five-tonne creation, which took more than six months to construct and plant out, goes into position in front of the Dunedin Railway Station early today.

Rugby World Cup co-ordinator Debra Simes said the council wanted a "really memorable feature" for the tournament and had been inspired by the 100% Pure New Zealand inflatable ball used in France.

"We were looking for something that was original, quirky. By positioning it in front of the railway station, it's absolutely Dunedin," she said.

The hollow steel ball, built by Scurr FR Engineering and Steve Mowat Construction, carries an exterior layer of packed soil for the plants to grow into.

Delta gardener Joneen Chalmers said there had been a few problems completing it, as snow and frost slowed plant growth.

However, she said it would be "awesome" when the green ball turned completely white with "snowland" chrysanthemum blossoms in a few weeks.

The flower ball will remain in place until the end of the tournament and it is hoped its components can be reused.