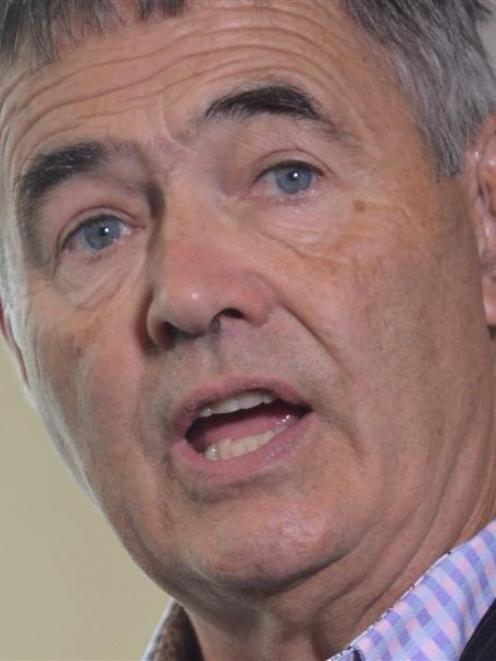 Dave Cull.
A proposal to truck frozen meals on wheels from Auckland to Dunedin and Invercargill has sparked outrage in the South.

Auckland is 1435km from Dunedin and 1639km from Invercargill.

The Southern District Health Board hopes to save $7 million over a 15-year outsourcing contract with Compass Group, and will decide in May whether to approve the plan.

Dunedin Mayor Dave Cull said there must be a way the health board could continue to produce meals on wheels in a cost-effective manner.

''I don't believe bringing the food all that way can save the money that they say it will .. . there has to be alternatives here that are competitive.''

The lessons of the Canterbury earthquakes about centralisation had to be heeded.

The change would affect local suppliers and businesspeople.

''For a whole lot of reasons I wouldn't have thought it was very sensible.''

Hospital patient meals are affected, too - they will be assembled on-site using pre-prepared meal components sourced from a variety of centres, including Dunedin.

Grey Power Otago president Jo Millar said the board should have been more open from the start about the ''ridiculous'' idea.

''What facilities are there going to be if they can't truck this food down south in the mid-winter?

''How long is the food going to be in frozen storage?

''We have no idea what the quality of those meals are going to be coming down from Auckland - absolutely none.''

Meals would be heated before delivery, but Mrs Millar said many older people ate in the evening.

She also feared the new meals for the hospital patients would lack nutritional value.

Mrs Millar said the South was losing too many jobs, and the health board had a responsibility to its community.

Without a functional economy with a range of jobs the community suffered.

As health was funded on population levels, the drain of jobs from the South worsened the board's funding woes.

Too much development centred on Auckland, which had a housing shortage, Mrs Millar said.

The food service plan has been in train for about two years, but has been beset by delay and changes, and until this week, little detail about where food would be produced.

Southern kitchen staff have been told that if Compass takes over, it is likely to review the service, and will probably need fewer of them.

Health board chairman Joe Butterfield said he could not comment because staff consultation was under way.

''Compass Group intends to work closely with volunteer organisations in Dunedin and Invercargill who deliver meals, to improve the information available and communication to recipients on safely handling their meals when they are received,'' chief operating officer Julian Baldey said.

''Compass Group will provide contingency plans which as a minimum will meet the current plans in place of Southern DHB at all of its hospitals.''

Dunedin North Labour MP Dr David Clark said the board needed to spell out how adverse incidents would be dealt with financially in the contract. He feared the board would not realise the $7 million promised savings, because of unexpected costs.

Other health boards have also considered outsourcing food services, after being encouraged by the Government to save money.

A spokeswoman for the Waikato District Health Board told the Otago Daily Times managers there recently recommended the board not go ahead with outsourcing at this stage, and see how it fared in Auckland first.

The final decision will be made at the board's May meeting.

The Otago Daily Times facebook page and website together received more than 90 comments yesterday about the plan.

It also stirred commenters on the Stop Dunedin Hospital From Being Downgraded facebook page.

Nearly all commenters oppose the idea because of local job losses, logistics of transporting meals the length of the country and the sense Dunedin is again being left in the cold at the expense of other centres.