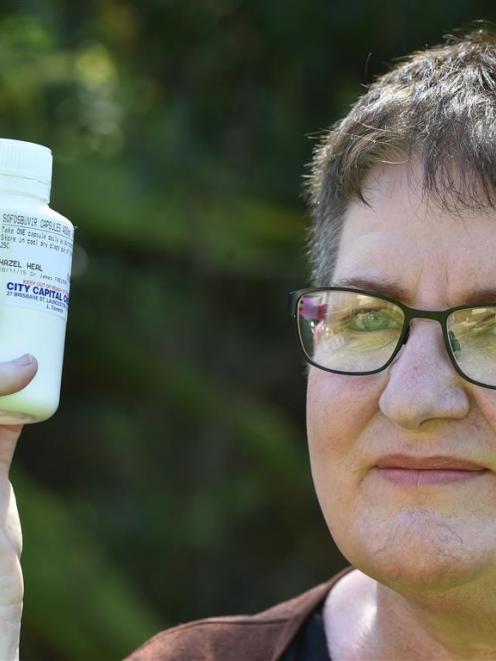 Dunedin law student Hazel Heal with drugs she sourced in Australia to cure her hepatitis C. Photo by Peter McIntosh.
A Dunedin woman who has imported new generation hepatitis C drugs she says will save her life wants to get her message out to others to source them from a ‘‘buyers' club'' in Australia.

Earlier this year, law student Hazel Heal was on the verge of needing a liver transplant, but this week the virus was all but undetectable in blood tests.

Her call comes just days after the Australian Government announced a $1 billion investment in the ground-breaking treatments to help cure the 230,000 Australians living with the disease.

But despite an almost 100% success rate for the new drugs, and an estimated 50,000 sufferers with increasing rates of liver cancer, New Zealand seems unlikely to follow suit.

A Pharmac response to the Otago Daily Times showed funding for the drugs was a low priority.

Ms Heal said she picked up the virus about 30 years ago when she was in her early 20s in ‘‘one of the usual ways we all got it - either being in the wrong place at the wrong time or taking a risk, as 20-year-olds will''.

She was treated twice with interferon, a drug that caused its own health problems, but with no success.

In September this year, after a scan of her liver, she was told ‘‘you need treatment yesterday''.

However, she did not make a liver transplant list, which would have meant government funding of the new generation drugs.

While dealing with that information and studying for first-year law exams, she discovered Australian groups sourcing cheap drugs from India and China.

She found website www. fixhepc.com, which included information on a buyers' club, where people got together to buy drugs from overseas.

She then had a Skype appointment with Tasmanian GP Dr James Freeman.

That, she said, was ‘‘a good 40-minute appointment - he's very, very thorough'', which required blood results and other medical information.

Dr Freeman emailed a prescription, Ms Heal emailed that straight to the buyers' club, and the drugs were on their way to a family member in Australia.

The prescription was for a drug unavailable even for the high price paid in New Zealand, which was ‘‘the gold standard'' for the strain of the disease she had.

The cost was $3800 for a six-month treatment, although Ms Heal said most people with hepatitis C would pay less than half of that, and a shorter treatment period.

The stage of her disease, the genotype and treatment resistance meant she required three drugs for longer, rather than the usual two.

She flew to Australia, collected the medication, and began taking the pills on November 14.

Prescribing the medicine was legal, as Dr Freeman was an Australian doctor writing an Australian prescription for drugs encapsulated and tested in Australia.

They could have been posted to New Zealand, but Ms Heal said she was concerned there may be problems, and brought them in herself.

The results had been ‘‘spectacular''.

Now, Ms Heal said she wanted to reach people with the virus to tell them they could be cured too, using the same method.

Her experience had ‘‘imposed a civic duty on me to reach other people''.

Dr Freeman, who charged only the cost of a GP visit, and campaigner Greg Jeffreys, another Tasmanian who set up the buyers' club, ‘‘didn't know me but they've saved my life.

‘‘The pair would be personally responsible for saving the lives of thousands of people.''

Ms Heal said buying the drugs had saved the New Zealand health system hundreds of thousands of dollars, as she would now not require treatment or a transplant.

‘‘It's so sensible to cure people on an eight-week treatment before it gets bad.''

‘‘Every person who takes this step is saving the health system an enormous amount of money.''

The number of people with liver cancer was escalating, with higher-than-predicted end-stage liver disease.

As well, people had heard the ‘‘horror stories'' of current treatment interferon and its 50% success rate, and the 97% to 100% success rate of the new drugs.

‘‘These medicines appear to be very effective in many circumstances, with the potential for patients to become disease-free.

‘‘However, funding would be a substantial commitment, which Pharmac needs to consider carefully against all our other funding options.

‘‘The good news is that competition for supply of these treatments may mean they could become available for New Zealanders with hepatitis C.''

A Ministry of Health spokeswoman said Daclatasvir, which Ms Heal was taking with two other drugs, was not an approved medicine for supply within New Zealand.

‘‘Authorised prescribers [usually medical practitioners] can arrange for the supply of unapproved products to patients in New Zealand.

‘‘There are several mechanisms by which this can take place.''

Medical practitioners and other healthcare professionals involved in the supply of unapproved medicines or the care of patients using such medicines should be familiar with their obligations with respect to providing an adequate level of care.

Health Minister Dr Jonathan Coleman said the issue was ‘‘a matter for Pharmac''.