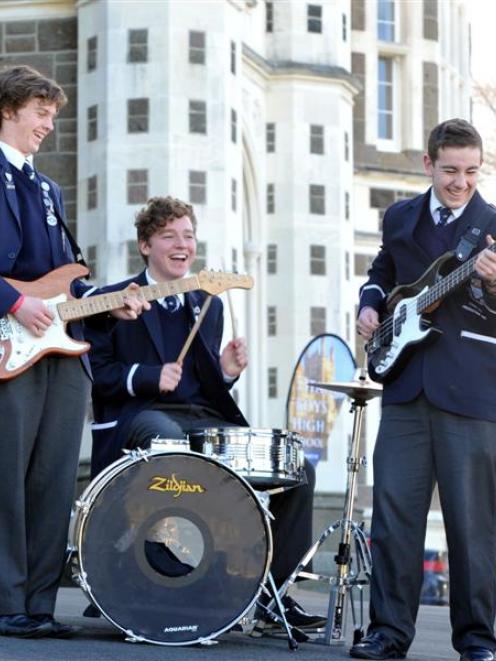 Puzzle Puppets members (from left) Connor Blackie, Nick Alexander and Callum Fisher wait to hear if they have been selected to compete in the national final of the Smokefreerockquest in Auckland next month. Photo by Craig Baxter.
Three Otago Boys' High School pupils say they feel like ''sitting ducks'' as they wait to hear if they have made it to the final six bands in the New Zealand Smokefreerockquest.

On Monday they will learn if they are one of six bands which will perform live in Auckland next month for the title of Smokefreerockquest band of 2013.

There were 654 entries in this year's event, with contenders from 23 regional finals sending in DVDs of their performances for selection to play off at the national final on September 28.

This week, they learned they had made the list of the top 20 bands which will be whittled down to six next week.

''It's pretty exciting - we didn't expect this,'' Connor said.

''I don't remember the last time an Otago Boys' band got this far.

''It's been about 10 years since a Dunedin band won.

''There is a lot of creativity and effort that goes into making these DVDs of original music.

''It just highlights that there's a lot more to Smokefreerockquest than singing someone else's song on a reality TV talent show.''

Connor believed the Puzzle Puppets had a good chance at making the top six, but he was realistic about it.

''It's a tough competition.

''The finger nails will get worn down by guitar strings and chewing.

''But there's not much we can do now.

''What's done was done over a month ago when we won the Otago final. We've been sitting ducks since then. We've just got to wait now.''

Central Southland College pupil Lily Jackson has made it on to the list of the top 10 solo/duo performers in the Smokefreerockquest which will be whittled down to two for the national final in Auckland.