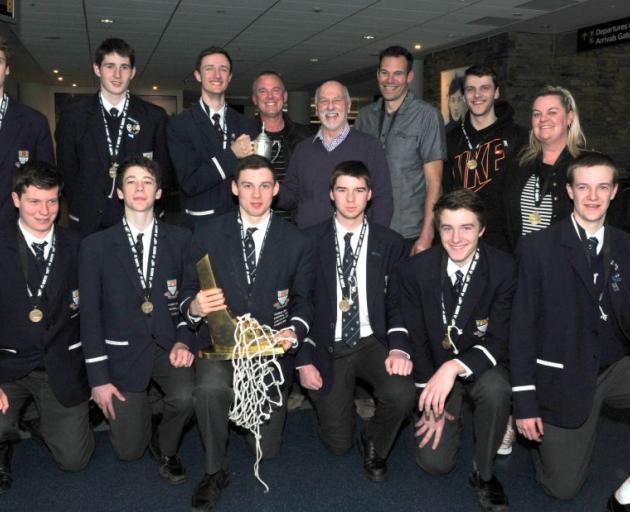 It is the first time Otago Boys' has won the title and it is also the first South Island school to win the title since Nelson College achieved the feat in 2000.

Otago Boys' owed a lot to its tournament MVP. Timmins was almost unstoppable under the post and led his team to a 74-69 win over defending champion Westlake Boys' High School in the final.

But guards Joe Cook-Green and Liam Aston were also instrumental in the team's success and were named in the tournament team. Cook-Green scored 16 points in the final and Aston chipped in with 11 points.

Timmins was the biggest single contributor but it was Otago's depth which carried it through the tournament unbeaten, coach Gavin Briggs said.

''He was just absolutely awesome for us,'' Briggs said.

''The guy is just so clever. He is a smart basketballer. I think he gave up two fouls in the last two games and he played 80min for us. That was crucial for us.

''But it was also the effort of everyone else who was playing and coming off the bench which made us successful.''

The pace at which Otago Boys' played the game caught many of its opponents by surprise and the team had the fitness to keep the tempo high right until the final hooter.

Statistically, Timmins had a colossal game in the final. Who takes 23 rebounds and scores 26 points?

It was a terrific performance but, arguably, his huge second-half effort in the semifinal against Rangitoto College was more impressive.

Alok had been dictating terms until Timmins made two blocks early in the third quarter. It was one of the pivotal moments which helped turn the game. Otago Boys' trailed at halftime but outscored its opponent 20-6 in that crucial third period and went on to win 77-62.

Timmins was still trying to absorb the past week when the ODT phoned him for comment. He has stayed on in the North Island to visit his grandparents.

Being named MVP was ''just kind of the icing on the cake'', he said.

''The main thing was winning with the team. That was special.

''It was kind of picture perfect. Half the team have been training together since year 9 and to get up and win the national title in our last year, well, it couldn't have unfolded better.''

Basketball is in tremendous health at school level in Otago.

''Basketball is on the improvement and we still have a lot of juniors coming through,'' Briggs said.

The national U13 championships are being held in Dunedin this week.