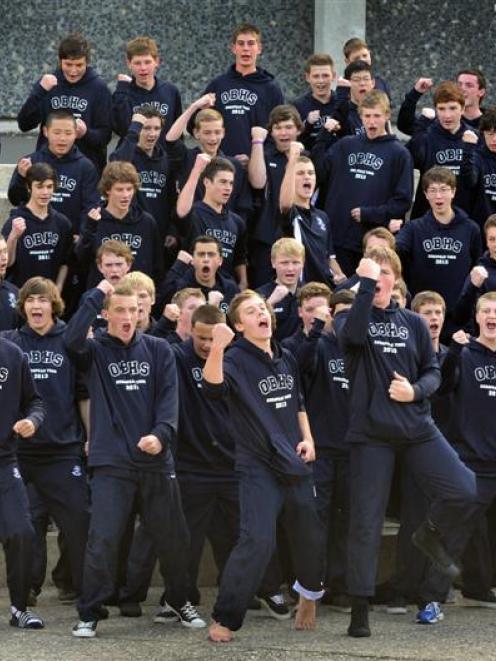 The pupils left Dunedin yesterday, bound for London, on a three-week sporting and cultural tour, as part of the school's 150th anniversary celebrations.

Rector Clive Rennie said the tour would include visits to the New Zealand War Memorial at Hyde Park, in London, and performances at St George's Chapel, Windsor Castle, and at Dortmund, in Germany.

On Anzac Day, they would visit the Milan Commonwealth War Grave Cemetery where they would conduct their own Anzac service, he said.

On May 1, they would travel to Ypres, in Belgium, to visit the World War 1 Anzac battlefields, and observe ceremonial duties and the Last Post at the Menin Gate.

While sharing and performing New Zealand music, much of it having been composed by past and present pupils of the school, the boys would also play several sports against school teams in London, Paris and Milan.

He said the group was not chosen for their sporting or cultural ability. Rather, any pupil who wanted to go was able.

''It's mainly to give our pupils a cultural experience of the other side of the world.

''It's a great situation.

''One of the things we suffer from here is, the cultural side of things is not something everyone gets involved in.

''This will be an opportunity to learn to do some things they wouldn't normally do.

''Pupils that play rugby will learn to sing, and vice versa.''

Mr Rennie said the pupils would be accompanied by four senior staff members and five parents.

''They will be counting heads at every opportunity and there is a safety plan for every eventuality.''

The party was scheduled to return early next month, he said.