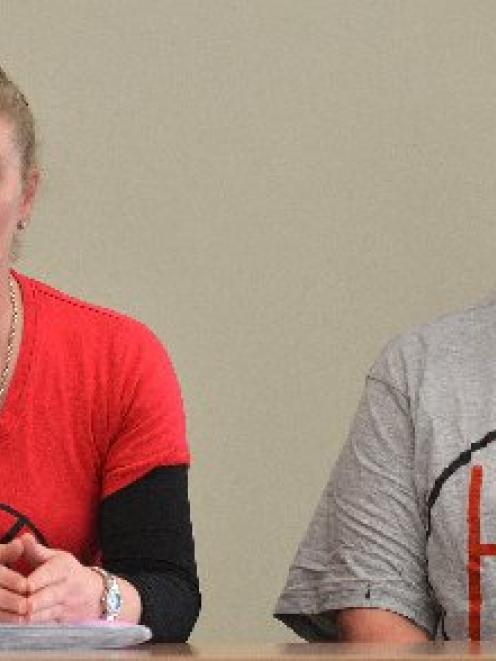 Union representatives Karena Kelland (left) and Anna Huffstutler address health board members. Photo by Peter Mcintosh.
Fourteen months after a controversial plan was revealed, southern hospital kitchen staff have demanded answers about their jobs at a Southern District Health Board meeting in Dunedin.

Service and Food Workers Union members presented a petition to yesterday's board meeting, with about 1000 signatures calling for a privatisation proposal to be stopped.

Union delegate Karena Kelland, who works at Southland Hospital, told board members kitchen workers did not know what was happening.

The presentation focused on the lack of information, and the long delay in Dunedin and Invercargill staff being told whether their jobs were safe.

The privatisation proposal, from Health Benefits Ltd (HBL), an entity established by the Government to cut costs, affected patients and local food suppliers, as well as staff, she said.

The workers tried to present to last month's meeting, but their request was denied.

There were many HBL projects under way in different areas and they were all at different stages, she said.

Even when there was nothing to pass on from HBL about the kitchen project, staff would now be kept in the loop, the senior managers assured members.

Board member Neville Cook said staff believed the proposal was driven by the board and could be stopped by it, but that was wrong.

It was not in the board's control. Member Tuari Potiki said kitchen staff were among the lower paid health staff, and the lack of communication could make them feel they were not valued.

Chairman Joe Butterfield said the board had been trying to talk HBL into changes to its kitchen proposal, and that had caused delay.

HBL's plans to centralise most hospital kitchen food production to mega-hubs in Auckland and Christchurch under a sole provider caused an outcry when revealed in April last year.

However, little of substance appears to have happened since to move it towards implementation.

At present health boards make their own arrangements for food services, some delivering it in-house and others outsourcing it.