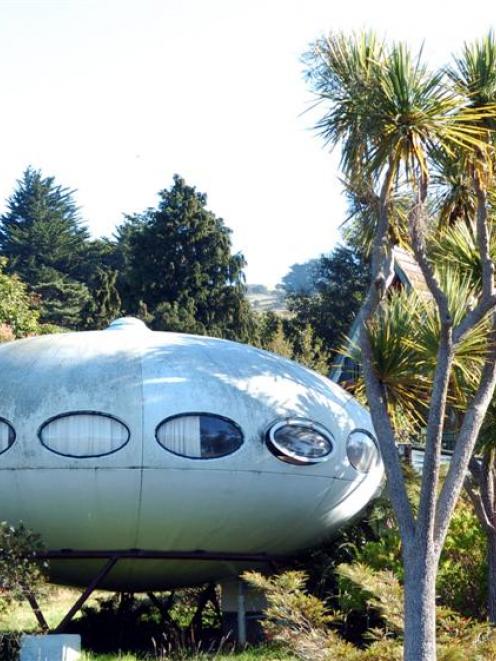 Warrington's "flying saucer" house may be shooting off to a new base on Auckland's beach front. Photo by Gerard O'Brien.
Auckland . . . the final frontier.

Grant Major, the owner of Warrington's resident "flying saucer", is on a two-year mission to seek out a new life and take the house where no other like it has gone before.

The Auckland businessman owns the Futuro house, designed in 1968 by Finnish architect Matti Suuronen, and intends to move it to a beach-front spot in the city of sails.

The unearthly looking visitor was built in Christchurch in 1972 and many New Zealanders would have had their first encounter with it as a bank for the 1974 Commonwealth Games, before it was refitted as a house and relocated to Warrington. There, it has become a landmark.

The futuristic design is constructed entirely of reinforced plastic, can accommodate up to eight humanoids and, in the late 1960s, the plan was to mass-produce it. Because it is so light, it is easily transportable by helicopter and mobile living was the new idea for the future.

Unfortunately, only 96 Futuro houses were built, 12 of which were made by a Christchurch company under licence.

The 1973 oil crisis was widely blamed for spoiling plans to mass-produce the design because the price of plastic raised production costs beyond profitability.

But many also believed it was the lack of closet space, or the lack of places to hang pictures of Star Trek's Captain James T. Kirk, in the 3.3m x 7.8m open-plan structure which caused its meteoric plummet in popularity.

Mr Major (53) said he and his partner, Judith Darragh, bought the house six years ago as a holiday home to add to their collection of "mid-20th century icons".

The couple's collection includes a 1964 Ford Thunderbird, furniture made of fibreglass and artworks from the era.

"I originally saw the Futuro design in one of my father's Playboy magazines in the 1960s and I've been after one ever since."

Mr Major said he was waiting for property prices to drop in Auckland so he could afford to buy land with a coastal view. He hoped the house could be moved within the next two years.

While it came to Warrington in peace, the "flying saucer" is sure to leave in pieces.

"It's modular. It comes apart in segments like an orange and can be transported in pieces," he said.