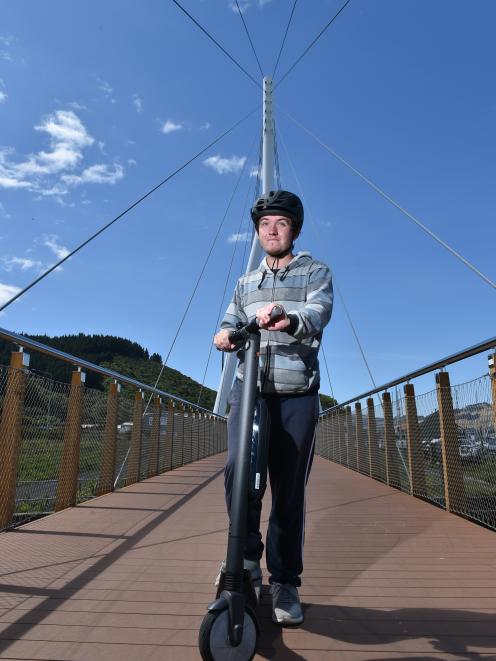 Since Lime launched in Dunedin early this year Jordan Cleaver has travelled more than 250km using the e-scooters but since they were pulled from the streets on Friday night he has been back riding his own e-scooter. PHOTO: GREGOR RICHARDSON
Dunedin will be Lime scooter-free for at least another day while the company strives to bring its safety up to scratch.

The company voluntarily removed its e-scooter fleet from the city on Friday night after brake malfunctions led to the Auckland Council ordering them off the streets.

Dunedin City Council community services general manager Simon Pickford said he spoke to Lime representatives on Monday morning, who told him it would still be at least another day until the scooters were back in service.

Lime says it has developed a series of firmware updates for its scooters and is confident the glitch has been corrected.

Auckland Council had asked for third-party verification of the update and would not be allowing the scooters back until that had been received, Mr Pickford said.

"We wouldn't be comfortable with the scooters back on the street until Auckland had received that third-party verification, and they [Lime] were happy with that and accepted it may be a few days until that happens.''

Mr Pickford said he was in regular contact with his counterparts at the Auckland Council and the DCC was happy to wait until they were satisfied the issue had been fixed.

The sudden removal of the service has left some Lime fans considering their options.

Since the service launched in Dunedin earlier this year, Jordan Cleaver has travelled more than 250km on a Lime scooter, taking 79 separate rides.

Since the scooters were removed on Friday, Mr Cleaver has been using his own scooter which he bought about a month ago.

"It's been getting fixed up in Auckland and luckily I got it back before Limes were taken away.''

The temporary recall would lead to more people buying their own scooters, he said.

Another super-user, Gabriel Miller, said he had returned to driving since the scooters were unavailable.

Mr Miller has travelled about 143km on the scooters and said he wanted to see them returned as soon as possible.

He was also considering buying his own e-scooter.