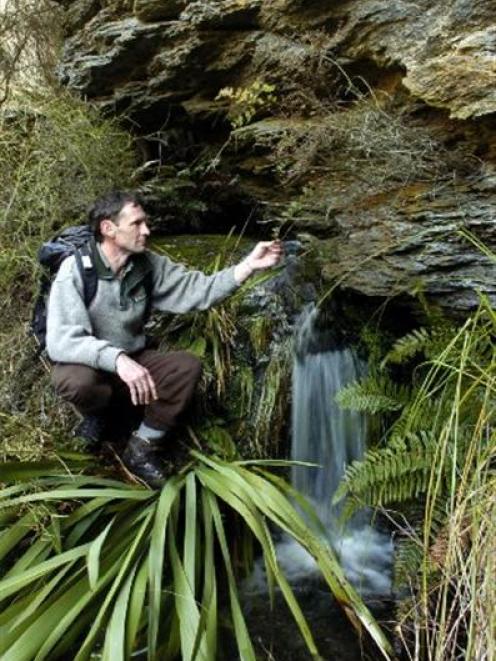 Doc botanist Mike Thorsen examines the plant life in a gorge in the Macraes area. He discovered a patch of Simplicia laxa, a nationally endangered grass, beside the waterfall. Photo by Gerard O'Brien.
Macraes Flat is well known as the home of New Zealand's critically endangered skinks, but now there is a new claim - that the area has the highest diversity of threatened plants for its size in the country.

The claim is the culmination of three years of plant research by Department of Conservation botanist Mike Thorsen.

"They [IPAs] raise the profile of sites with a lot of unusual plants."

Doc had recorded 350 native species and 84 exotic species at the site and believed the diversity was probably the result of its geographic placement - it is 25km inland - and altitude - from 400m to 714m above sea level.

"Your first impression is that it is standard tussock country, nothing out of the ordinary, but if you spend some time, look closer, you find all these wee things. It's absolutely stunning."

However, new records of native species were still being made - at a rate of just under one species a day.

Two species found appeared to be undescribed local endemics known only at Macraes, he said. These were a small Thelymitra orchid and an Uncinia hookgrass.

"One of the big pleasures of the job, in botany, is the chance to find new species."

• Conservation Week in the capital began today with the opening of a marine reserve on Wellington's south coast.

The Taputeranga reserve extends 2.3km out to sea and along 3.3km of coastline encompassing Owhiro, Island and Houghton bays.

The area's reserve status means a fishing ban is now in place as a measure to preserve marine life.