Matches expected to sell out 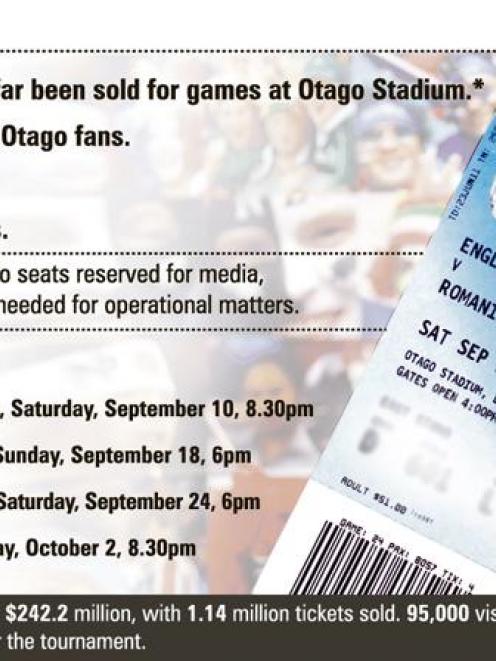 Three of Dunedin's four Rugby World Cup matches are likely to sell out, with 74,000 tickets already snapped up by fans.

While only 10,000 tickets had been sold for the England v Georgia match, he said he was confident more tickets would be snapped up in a "last-minute rush".

"I think we will get three, and that England v Georgia game has a chance ... we do think the final capacity will be a hell of a lot higher."

He confirmed Forsyth Barr Stadium - which will be known as Otago Stadium during the tournament - will have its capacity reduced from 30,000 to 26,000.

Mr Snedden said the 4000 reduction in capacity was due to the large media contingent, sight-restricted seats around the perimeter of the ground because of larger World Cup signage, and extra television cameras obstructing views.

Overseas fans probably had tickets for three or four matches, and most of the Dunedin sales were likely to go to people in the southern region, he said.

"This is a snapshot as of [yesterday], but this will change quite significantly."

Mr Snedden said it was pleasing to hear people from Christchurch were travelling to Dunedin to take in the World Cup experience, after matches were shifted from the quake-damaged city, including two to Dunedin.

Dunedin gamesexpectedtosellout> From Page 1David Davies"It is sad what happened in Christchurch [the earthquakes] but Dunedin was definitely a beneficiary of it. People down there have been really respectful of that."

With three England matches, Dunedin would gain "high profile through the media. It is going to give the city and the stadium such fantastic exposure".

Nationally, ticket sales have hit $242.2 million, and there had been an increase in sales from across the Tasman following the All Blacks v Wallabies test match on Saturday.

Dunedin Venues Management Ltd (DVML) chief executive David Davies said momentum was building for the tournament, and "the general reception for the stadium has been excellent".

He was pleased with the mix of fans and this "would be a real boost for everyone".

Confirmation people in Christchurch were coming to the games, would add extra weight when DVML tendered for further events, he said.