Mountain of recycling piling up at Dunedin dump 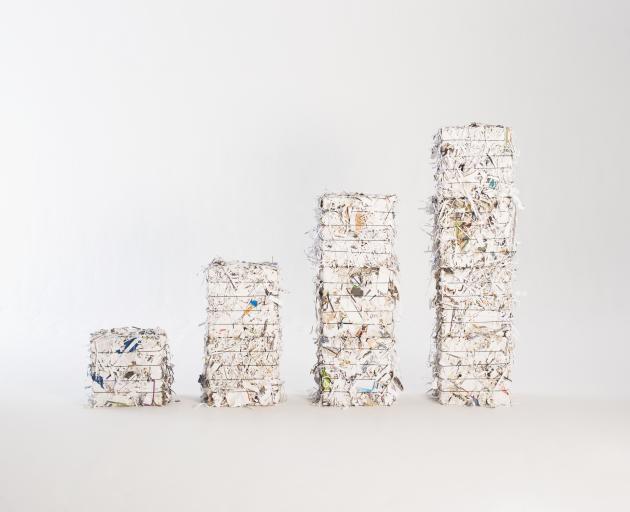 Photo: Getty Images
A mountain of unwanted recycling is building up at Dunedin’s processing facility, as tighter restrictions by China lead to an international glut of materials.

However, the Dunedin City Council hopes investment in new domestic processing facilities within New Zealand could yet provide an alternative to shipping the city’s recycling overseas.

That could include a joint DCC-Otago Regional Council bid for money from the Provincial Growth Fund to help pay for a new regional approach to waste minimisation, DCC staff have confirmed.

The developments emerged as DCC waste and environmental solutions group manager Chris Henderson on Friday confirmed there was now a 450-tonne stockpile of recycled paper — newspapers, magazines and flyers — at the city’s Green Island processing facility.

The stockpile had been accumulating for about the last two months, at a rate of about 250 tonnes a month, due to the loss of markets for the materials, he said.

That followed a decision by China in 2018 to introduce its "National Sword" policy, banning imports of most plastics and other materials, including paper, after previously handling almost half the world’s recycling.

The new policy had created flow-on effects for international supply, which was now higher than demand, leading to stockpiles like the one in Dunedin, he said.

"The market for recycling material is drying up quite quickly at this point in time," Mr Henderson told a DCC meeting on Friday.

India was now the only export market available for mixed fibre, but had "stringent" quality controls requiring less than 1% contamination before material was accepted.

In New Zealand, Oji Fibre Solutions processed fibre, but the company already had sufficient supplies from sources closer than Dunedin, he said.

DCC solid waste manager Catherine Irvine said the council was now discussing a new regional approach to waste minimisation and new facilities — and how to pay for it — with the ORC.

That could result in an application to the Provincial Growth Fund, she confirmed.

The city — like others in New Zealand and overseas — had become reliant on overseas markets for recycling, but had "created a rod for our own back by doing that", she said.

Mr Henderson said more investment by the Ministry for the Environment — using Waste Levy funds to develop on-shore processing facilities in New Zealand — was also on the horizon, and was expected to help ease the situation in future.

In the meantime, he was confident a market for Dunedin’s existing stockpile had been identified, but there would need to be tighter control of contamination levels within the city’s recycling in future to ensure the material was accepted.

"We have not had issues in the past, but with new standards in place we want to ensure that we don’t incur the cost and loss of reputation in the markets by having material sent back."

It represented a "significant challenge" for councils, 10 of which had either stopped, or were about to stop, collecting some types of plastic.

Two of New Zealand’s largest councils had also been forced to "bail out" their recyclers, she said.

Japan burns their plastic and generates electricity cleanly. That is the only viable usage of large volumes. After all, plastic is mostly oil based. Paper packaging has its limitations. Biodegradable plant based plastics are the way to go- but our government has outlawed their usage in plastic bags...a wise step? Europe and Asia are going that way for their single use bags.

Japan's ability to do this is down to exceptional household separation in recycling and separation of waste in the first instance. The kiwi mindset of bashing everything into the bin will never change and that will hinder any engineering efforts. It's easy to Google and comment on the headlines without knowing the facts. FYI I am a retired chemical engineer. Stop spreading falsehoods

Clean green waste to energy plants....
Oh wait, plastic is involved so Sage is anti it...but making roads from melted plastic etc is a ok.
Typical narrow minded greenie unable to see the big picture or believe research that goes against their ideology

Clean Green waste? Really Truthtimeplease. Not a term commonly used for plastic, though the article only mentioned paper. And there is a big difference between making something from oil/plastic and burning it...that's like say firewood and timber furniture are the same things.
Burning, even at high temp with careful controls on emissions, still generates C02. That's not something we want to produced more of. And the cost of an incarceration plant for a city sized waste flow is not cheap.
If we can't reuse the paper, can we compost it? Shred it, mix it with green waste ( and by that I mean plant waste like the Green Island tip takes) and use it on council land or sell it.

Hahaha, composting has zero emissions does it?
WTE plants in Europe output less 'baddies' into the air than comparative leaf matter decomposing.
You will ask for facts/evidence, I will supply you with that when you can provide pure scientific data to prove man is stuffing the atmosphere (which I know you can't proved because it's the biggest scam pushed on the human race since the FACT that the world was flat and the earth was the centre of the universe)
Ps. Water vapour does more for climate than co2, so unless you have a plan to stop the volcanoes doing their thing (more co2 output than man) leave the discussion for the adults

You need to take your tin foil hat off and stop Trying to twist facts to support your argument.
«Professor Adam Sobel of Columbia University provides a nice analogy,
Saying water vapor is a more important greenhouse gas than carbon dioxide is like saying the amplifier in a sound system is more important than the volume dial for producing the sound. It’s true, in a literal sense, but very misleading. CO2 and other long-lived greenhouse gases are the volume dial on the climate, and the water vapor amplifies the warming that they produce".
Human activities emit 60 or more times the amount of carbon dioxide released by volcanoes each year. Large, violent eruptions may match the rate of human emissions for the few hours that they last, but they are too rare and fleeting to rival humanity's annual emissions.

Oh my dear Pat...
Tin foil hats are for conspirisy nutters.
Where on earth did you read your info in volcanos?
I'm guessing you scoured the internet till you found one guy, one page that agreed with you.
Open your eyes to all research, not just the stuff that supports your bias