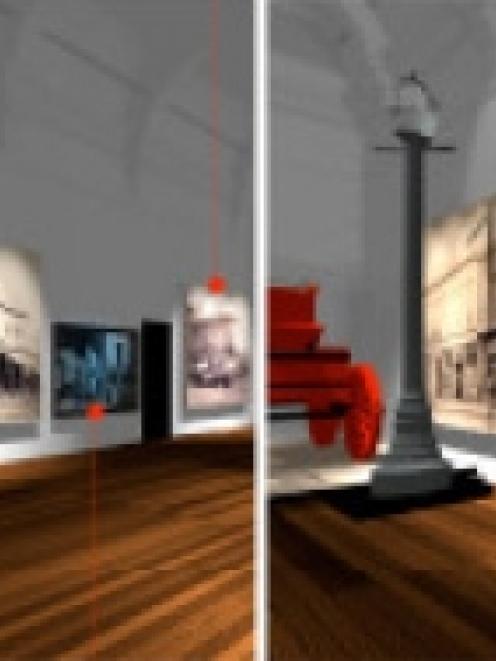 An artist's impression of the proposed wall screening photographic images from 1870s Dunedin. Image supplied.
Ratepayers will fork out up to an extra $2.16 million to fund necessary work not included in original $39.2 million Otago Settlers Museum redevelopment project budget.

Dunedin City councillors agreed yesterday to allocate the museum the money it needed to complete exhibitions and other components in time for the reopening of the museum in November this year.

Many of the "Wow!" elements had been underfunded or not budgeted for, council general manager of city strategy development Dr Sue Bidrose and museum director Linda Wigley said.

If the full exhibition and educational potential of the museum was unrealised on opening day, it could lead to disappointment and criticism from key stakeholders and the public, they said.

They asked the council to effectively underwrite the completion of the items to ensure the museum opened with a high-quality experience which met expectations.

In 2009, museum consultant Rodney Wilson had said a realistic figure for the complete fit-out of the new museum would be $11.5 million to $13 million.

Staff were intending to do it for less than $6.9 million and still provide a world-class museum, they said.

The council contribution could be less than $2.16 million, the women said.

Ms Wigley said the museum's fundraising committee was confident it could raise at least $1 million from sponsorship and naming rights.

"He said he could do $1 million easily, but $2 million would be a stretch," Dr Bidrose added. Money raised by the committee would be paid back to the council, they said.

The request sparked spirited discussion about the museum's finances, including why fixtures and fittings were not included as part of the $39.2 million redevelopment project.

Cr Lee Vandervis said the council had already allocated more than $30 million to the project and was now being asked to provide more.

The council already has $3 million in its 2012-13 budget for the final stage of the settlers museum project.

Dr Bidrose and Ms Wigley said that money had been for a tower which was no longer being built.

If the council funded the full $2.16 million for fixtures and fittings it would be able to shave $840,000 from the plan, Dr Bidrose said - and more later depending on how much money was raised by the museum's fundraising committee.

Crs Vandervis and Teresa Stevenson both asked why the $3 million had not been removed from the draft annual plan when the tower plans were scrapped last year.

"Was it left in there, on the quiet assumption it could be used to pay for something else, like fixtures and fittings?" Cr Vandervis asked.

Dr Bidrose said there was no evidence for that. The "genuine thought" throughout, and a thought still held by some people, was that the tower could have and should have been built.

Several councillors asked if the museum would be able to manage with less than $2.16 million immediately for fitting-out.

An amendment was proposed by Crs Stevenson and Chris Staynes, that the council allocate $1.1 million for fixtures and fittings, on the assumption the rest would be raised elsewhere.

However, the amendment was lost. The motion to provide $2.16 million was carried 7-5.