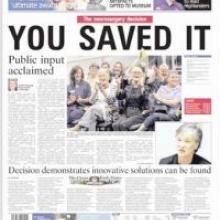 The highlight was its win in the Cause-Related marketing section (25,000 to 90,000 circulation) for its campaign to keep neurosurgical services in the South.

Recognition for the "It's a no-brainer: Neurosurgery - keep it here" campaign was particularly satisfying as the ODT, which celebrates its 150th anniversary in November this year, has a proud record of serving its community and putting readers first.

"I'm delighted the industry has acknowledged the success of our campaign. It speaks volumes for the power of the press, but, importantly, it recognises the passion of our readers who mobilised and won the fight for natural justice," ODT editor Murray Kirkness said from Sydney yesterday.

Very rarely do newspapers commit to high-octane single-issue campaigns, but the cause of saving neurosurgical services in the South was a no-brainer for the ODT.

The campaign precipitated an extraordinary response and Otago and Southland people spoke, wrote and marched in unison, calling on Health Minister Tony Ryall to retain neurosurgery services in Dunedin.

At the heart of the issue was the proposal to remove neurosurgery from Dunedin Hospital and relocate it to Christchurch. Health reporters Elspeth McLean and Eileen Goodwin, and others, played vital roles in breaking down complex issues to allow readers to understand the debate.

It had been an intense campaign.

Proudly, this newspaper led the way and our headline after the panel's decision on November 10 said it all - YOU SAVED IT.

The Panpa awards attract entries from every significant newspaper company in Australia and New Zealand, plus most English-language newspapers in Southeast Asia and the South Pacific.

The ODT capped a successful conference by winning the top two prizes in the Bright Ideas marketing workshop.