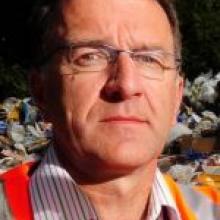 Ian Featherston
Despite some confusion across Dunedin about the city's new $26.7 million recycling system, and late pick-ups by workers getting used to new routes, the city council is happy with progress in the first week.

One result has been a 20% decrease in rubbish collection for both the council and private contractors, meaning less waste to landfill.

The first four days of the system has seen 26 tonnes of mixed recycling collected, and 15 tonnes of glass, all diverted from landfill for recycling.

The Otago Daily Times reported on Monday there had been a messy clash of yellow-lidded wheelie bins, black rubbish bags and blue bins jostling for space beside Dunedin streets, as over-eager homeowners put out all three receptacles at once.

Blue bins for glass had been contaminated by paper, plastic or other materials.

Infrastructure services committee chairman Cr Andrew Noone yesterday urged residents to double-check the calendars sent out with bins, or talk to neighbours, to make sure which receptacle was put out on which week.

Another problem had been over-full wheelie bins, as people had packed those receptacles in the weeks leading up to the launch of the new system, something that caused problems, especially on windy days.

As well, some people were placing newspapers and paper, and in some cases cans and bottles, inside plastics bags before putting them in wheelie bins.

That was not necessary, and created more work for sorters.

Mr Featherston said a "pleasingly small" number of people had put rubbish in the wheelie binsEnviroWaste operations manager Vaughan Adams said workers had put in some long days as they got used to the new system, and the new routes, but he was happy with their work, with streets he had seen looking "spotless".

Where bins had not been picked up, workers had gone back to do so.

Council customer services manager William Robertson said his staff had received 1400 calls during the week, mainly about the delays, but that was far lower than the worst case scenario the council had planned for.

Mr Featherston said, in future, some of the pick-ups were expected to start from 7am instead of 8am, but notice would be given before that started.

He asked residents to be flexible.

"It will probably take a month to settle in."

Mr Featherston said the delay in the delivery of some 80-litre kerbside recycling collection bins, caused by the Christchurch earthquake, was now not expected to be resolved until March 14.

Letters would be sent to residents affected.

The recycling is being sent to Christchurch while the city waits for its new $3.5 million materials recovery facility in Green Island, scheduled for completion on May 31.