OBHS choir warms up for its Big Sing final 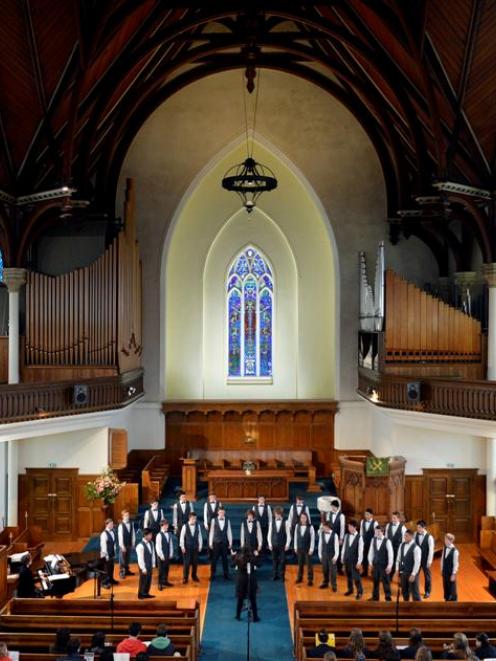 Members of the Otago Boys' High School choir Mandate perform under the musical direction of conductor Karen Knudson during a concert at Knox Church in Dunedin yesterday. Photo by Gerard O'Brien.
Successful school choirs are traditionally a more popular domain for girls.

But 23 Dunedin boys are changing the stereotype by creating Mandate - the all-male choir at Otago Boys' High School.

They are the only choir south of Christchurch, and one of only four male voice choirs in New Zealand, to be selected to compete in the national final of the New Zealand Big Sing Competition in Wellington this week.

Following the regional competitions, the adjudicators listened to recordings of the more than 240 choirs which participated in the regions around New Zealand, and selected 18 choirs for the national final.

While conductor Karen Knudson and Otago Boys' High School head of music Rob Duffy were delighted with the highly commended award the choir received after performing in the Otago Regional Big Sing Competition in June this year, they were thrilled when the choir was selected for the national final.

But there has been little time to revel in their success.

The school choir has been busy rehearsing and fundraising for the performances in Wellington.

Mr Duffy said an important part of their preparation for the national final was performing to an audience.

So the choir performed at Knox Church yesterday which gave it an opportunity to fine tune its programme.

The concert doubled as a fundraising Gala Concert which featured the Southern Hesperides Choir, the Barock Choir and local performance students from the University of Otago.

Mr Duffy said for many families, the $700 cost for each pupil to travel and compete in the competition had put significant pressure on some family budgets.

"Travel and accommodation have been booked for the whole choir as we need all boys to take part in the competition and seek every possible way to support all boys so they can be included," he said.

The boys will head to Wellington on Wednesday.