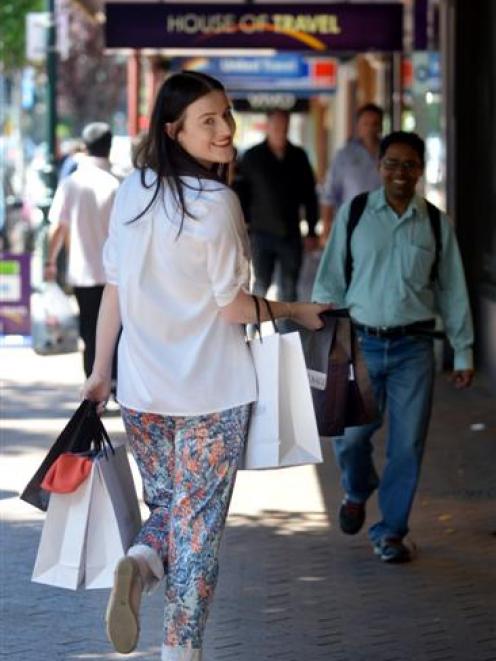 Jess Gleeson, of Dunedin fashion outlet Carlson, makes the most of George St yesterday, before a Tourism Dunedin campaign to lure women to the city for its shopping, galleries, boutiques and fashion shows. Photo by Stephen Jaquiery.
Forget ladies' night. Dunedin is set to host a ladies' season.

Tourism Dunedin plans to launch a seasonal marketing campaign next February to attract women to the city for autumn.

The campaign will focus on the finer things to be found in Dunedin, including cafes, restaurants, boutiques and galleries, and will make the most of iD Dunedin Fashion Week, which runs March 10-17.

Chief executive Hamish Saxton said the campaign would entice women to the city when its robust fashion industry will be on show.

''Dunedin offers the premium South Island urban experience including retail, bars, restaurants and cultural experiences. We are aiming to appeal to women from regions outside Dunedin including the wider Otago, Southland and Christchurch/Canterbury areas,'' he said.

''We will be hitting the ground running when the new year begins. The campaign will be looking to lure ladies to visit Dunedin,'' he said.

Retail outlets are in line to benefit.

''With so many talented new designers emerging from the Otago fashion school ... Dunedin's boutiques offer a wide selection of home-grown labels,'' she said.

Carlson had featured in all iD Dunedin Fashion Shows and it was one of many ''must-see'' fashion boutiques in the city, she said.