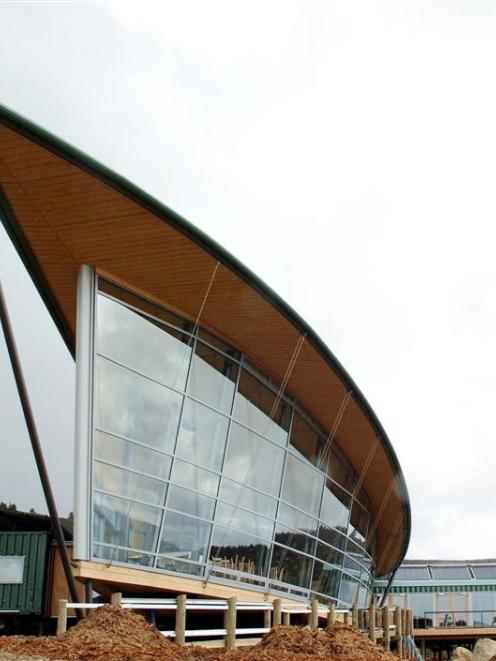 It was constructed from shipping containers linked by a glass atrium and is the latest milestone in the ecosanctuary's history, which began when the trust was formed in 1983.

Dr Allen, the Otago Natural History Trust chairman, said the craftsmanship that had gone into the building, on Blueskin Rd near Waitati, was superb, given its complex design and the diverse materials used.

"It's our cathedral in a way," Dr Allen said of the building.

Among its features were double glazing, concrete slab for thermal mass, solar hot water, natural ventilation and its own rainwater and wastewater treatment systems - all visible to the public.

Other features included interpretation panels, a cafe and a gift shop.

The macrocarpa timber displays, tabletops and benches were made from wood felled from ecosanctuary land and the soaring ceiling was made from untreated wood.

No tropical hardwood was used.

It was a project that would not have been so successful without the many hours of work the staff and volunteers put in and broad community support, he said.

"It's magical to me; this wholehearted support without anything in return."

Tours inside the predator-proof fence have been held for much of the year.

The official opening of the 560sq m centre on Friday night will mean that, from Saturday, arrival and entry to the ecosanctuary will be through the centre.

Tomorrow, the first official school group will visit the Otago Daily Times education centre to learn about nature conservation before taking a tour of the sanctuary.

A 60-minute tour would be added later.

Groups of up to 10 would be led by a trained guide around some of the 60km of tracks.

A team of six volunteers was being trained to point out the features of the cloud forest, and also birds that visitors would not commonly see in Dunedin, such as riflemen and the recently introduced kaka and saddleback.