Redrawing the map for stadium 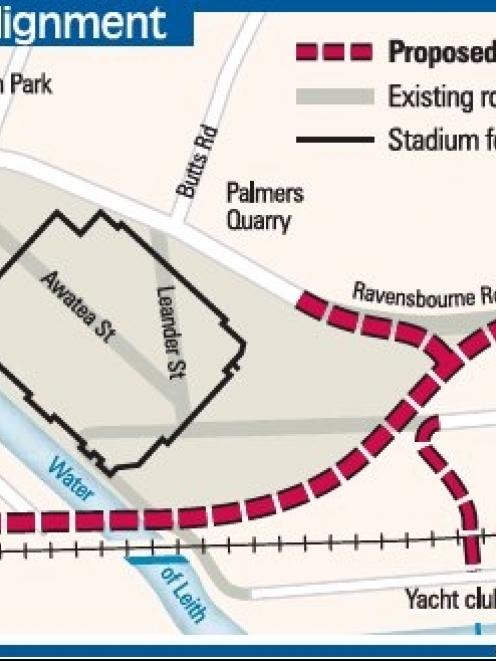 Proposed roading realignments. ODT Graphic.
Three streets are set to be closed, and a new road created, in the next few weeks to make way for construction of the Forsyth Barr Stadium in Dunedin.

With Awatea St already closed for stadium construction purposes, Dunedin City Council staff yesterday confirmed nearby Leander St, running almost parallel, would be the next to close, in about two weeks.

That would be followed by the closure of parts of Parry and Magnet Sts leading to the nearby railway and level crossing, expected at the beginning of July.

Council projects engineer Evan Matheson said the closures meant changes to the route used by rowing- and yacht-club members to access the boat reserve off Magnet St, and by workers at two industrial sites on Magnet St.

A new access road linking Parry and Magnet Sts would be built partway along Parry St, cutting through a disused railway siding owned by the council and between two industrial buildings.

Construction of the alternative route would cost up to $200,000 and would be paid for from existing council roading budgets, Mr Matheson said.

It was expected to be completed when the parts of Parry and Magnet Sts were closed.

The work would include the construction of a new level crossing with signals, but no barrier arms, to replace the existing crossing of the same standard on Magnet St, he said.

That work would be carried out by Ontrack, which would then bill the council.

The changes meant access to boating facilities, industrial buildings and the harbour cycleway would be maintained "at all times, but the way to get there will just vary slightly", he said.

The new road layout would not link directly with the planned State Highway 88 realignment, but would allow vehicles to join the highway via the remainder of Parry St, he said.

"A lot of them have long boats, like an eight-crew rowing boat. They are quite long, so they just want to make sure the [new] road is of a suitable design to accommodate those larger trailers . . . that come and go from there.

"I think we can keep everyone happy," Mr Matheson said.

The owners of industrial sites on Magnet St were "quite comfortable" with the changes, he said.

"It [the new road] will be to a good standard."