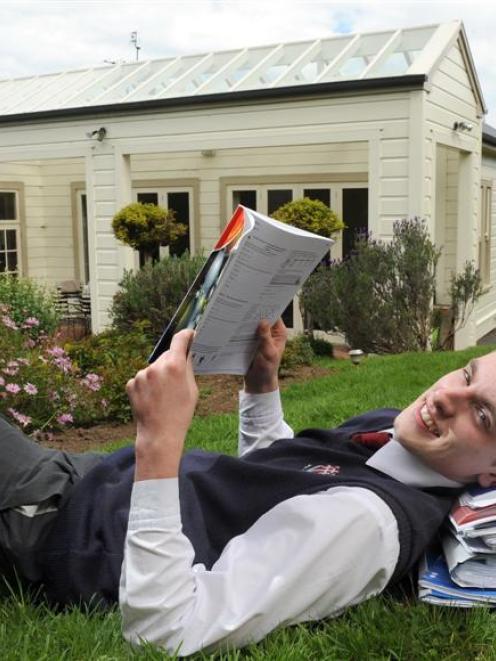 Kavanagh College pupil Nick Hume (16) is looking forward to being able to study at home for short periods rather than at school next year. Photo by Stephen Jaquiery.
A Dunedin secondary school plans to allow senior pupils to study outside school during school hours, as part of its bid to create an environment of pupil-led education.

Kavanagh College principal Paul Ferris said the initiative was inspired by the school's research into Choice Theory, which began five years ago.

He said pupils who were given choice did better in school because their education was not dictated to them.

"At the moment, when students have study time, they think of it as free time and they don't accomplish very much with it.

"Part of managing yourself and preparing to go to work when you've finished school is about learning how to work without supervision.

"We're going to teach students to work on their own, manage their own study and, hopefully, they will get better results."

Mr Ferris said the initiative would be started next year for year 12 and 13 pupils.

Every two weeks, senior pupils were given eight periods per subject of instruction.

As of next year, the eighth period would become a study period, in which pupils would have to complete assignments set by teachers.

Each pupil would be ranked on how well they managed their study time.

Those who did not know how to manage study time, or prove that they could manage it, would receive a red card.

They would then have to go to a classroom to be supervised and tutored by a teacher, Mr Ferris said.

Those who showed a little more diligence in their study would be given an orange card, which would allow them to use the study hour to work in various areas of the school, such as the library, science or computer labs.

They would still need to check in with a teacher before beginning the study period.

During the Christmas holidays, some of the school's interior spaces would be remodelled for pupils to work in.

Pupils who proved they were able to work successfully unsupervised, meet deadlines and get good grades would be given green cards, which would allow them to leave school during the study period and work in places such as the Dunedin Public Library, the University of Otago or at home, he said.

If grades fell, green cards would be revoked and replaced with orange cards.

Kavanagh would be the first school in Dunedin to use it.

The system was in place in Wakatipu High School in Queenstown.

Principal Lyn Cooper said its system, which was similar and was established this year, had been very successful in engaging pupils in learning.

Pupils had welcomed the system.

Kavanagh College pupil Nick Hume said he and his classmates were excited by the initiative.

"I reckon it's a great idea. It's preparing us for university life, where you have full control of your learning," he said.