Simon, sound and stadium in sync for show 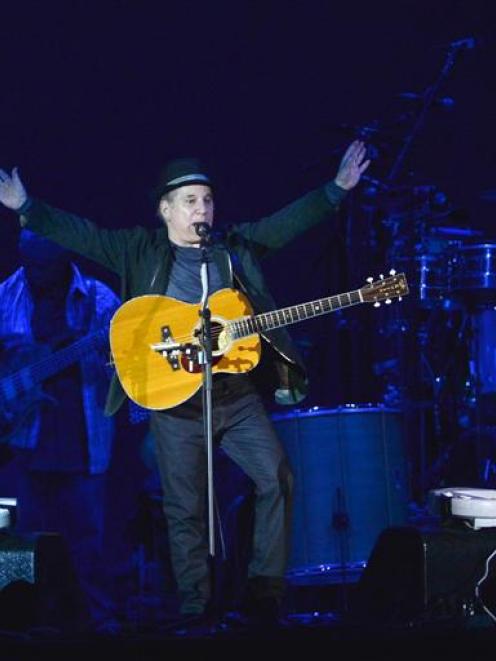 Manolo Echave, promoter Chugg Entertainment's New Zealand's representative, said Simon and his band were on ''a real high'' when they came off stage after playing their third encore.

''He [Simon] was exceptionally happy and the band were in a really good mood, and I think they all agreed this was one of the better shows of their tour.''

Guest artist Rufus Wainwright was also in a ''cheery frame of mind'' after his set in front of the 12,500-strong audience, and Mr Echave understood the singer later partied into the wee hours at the Dunedin Pride Festival after-party.

There were no issues, sound or otherwise, with the venue. As an example, the artists had found it convenient to drive to their dressing rooms at the stadium.

Mr Echave said while he would have liked a bigger crowd - he is worried about the market being oversaturated, which could translate into low ticket sales if not carefully managed - he would look at bringing other acts to Dunedin.

Dunedin Venues Management Ltd chief executive Darren Burden said he was over the moon about the event.

''It was absolutely superb. I am really, really pleased with how the whole thing went.''

The venue had performed very well, with there being only a few minor issues, largely behind the scenes, he said.

He spent much of the evening walking around, listening and talking to concert-goers. The sound was good wherever he went and the feedback was all positive.

Despite it being the biggest crowd on Simon's Australasian tour - his concert at Auckland Vector Arena tonight had sold about 8000 tickets so far - the number of ticket sales in Dunedin was still a bit disappointing.

From DVML's perspective, the show's success added to the reputation of Forsyth Barr Stadium as a great host for major concerts, including the Aerosmith show on April 24, which was being set up by the same production team, so the same quality sound and lighting could be expected, he said.

One of the fans interviewed, Faye Crawford, of Christchurch, said the concert had been great and everything about the stadium was good, including the sound.

The only issue was no area for people to dance in, which created sight-line problems when people stood up among the seating, especially after Simon encouraged people to get up and dance.

Comments online and in social media were also generally positive although the lack of big screens concerned some.

Mr Echave said if the audience had been a bit bigger, one would have been used. The numbers were on the cusp of what the production team considered probably required a big screen.

Mr Burden said he was also pleased with how the stadium had emptied in about 15 minutes. Although some people had to wait five or so minutes to get out, he was content with that if it meant everyone got out safely.