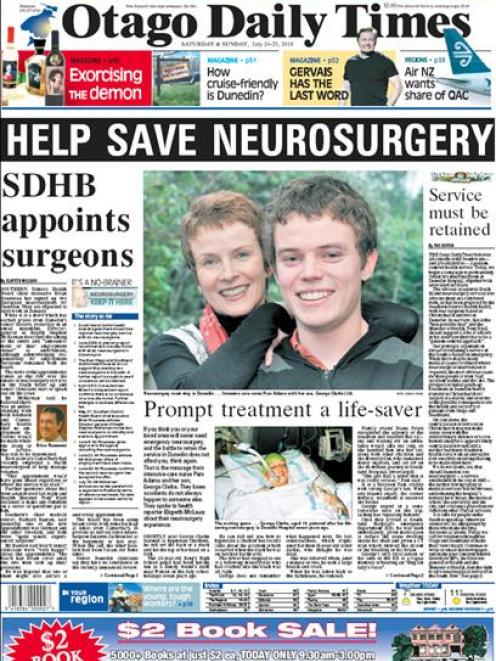 Did the Canterbury District Health Board, which for the most part chose to stay silent during the debate over location of South Island neurosurgery services, receive a fair hearing? Documentation released in February suggests it feels it did not, writes Elspeth McLean.


While the Canterbury District Health Board distanced itself from public comment during the Otago and Southland campaign to save the Dunedin-based unit, released correspondence shows it considered the public was not getting a full picture of the issues.

In a letter to the expert panel in mid-October, CDHB chairman Alister James expressed concern about the "way in which communities in the southern part of the South Island have been 'used' to create a concerted public response in relation to neurosurgery".

It had always been easy to engage communities and raise their fears over losing access to health services, he said.

"The efficient and effective delivery of health services in the South Island is still being ham-strung by the failure of past attempts to rationalise services into clinically appropriate groupings." 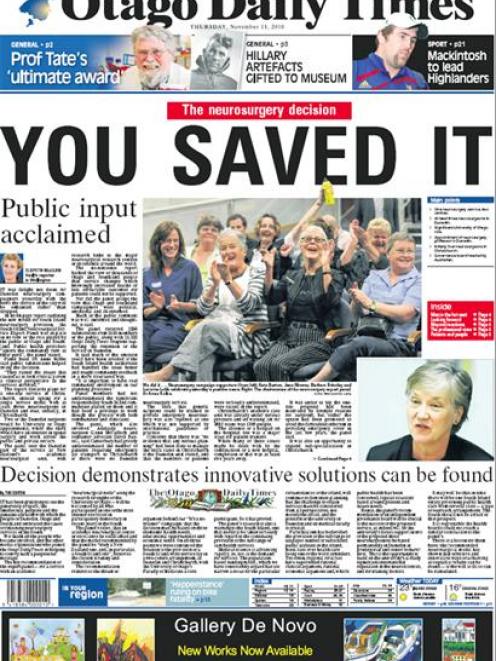 The Canterbury board had chosen not to respond to the "ongoing attacks, ill informed commentary misleading information and very personal comments" in both the Otago Daily Times and the Southland Times.

In its detailed response to the draft panel report the board was critical of the panel describing much of the public debate as well-informed.

The challenge of maintaining a high standard of neurosurgery with relatively low patient numbers had not been discussed with the southern population nor had they been made aware of the rationale for co-location of surgeons on a single site.

The extensive coverage had been based on personal views, single person case studies and sometimes pejorative comment targeted at Canterbury personnel, the board said.

In its extensive comments the board also made the point that less than 5% of neurosurgical cases required urgent neurosurgical intervention within one to four hours in order to save life or prevent or lessen major neurological deficit.

Two out of three neurosurgical operative cases required surgery on a semi-acute basis within a week of presentation. The remaining third of cases could be undertaken as planned or elective procedures. The term "golden hour" used in the report was not relevant to the vast majority of neurosurgery cases, the board said. The prospect of an independent governance body also concerned Canterbury.

Mr James described it as resulting in additional bureaucracy, duplication and administrative costs, against "current efforts to shift more resources to the 'front line'."

It was also setting a precedent for managing selected services outside existing statutory structures which was "fraught with difficulties, quite apart from increased costs; unrelated to patient care and quality".

The board was concerned about the potential for unravelling a "very high performing neurosurgical service in Canterbury".