The Stadium challenge: make it pay 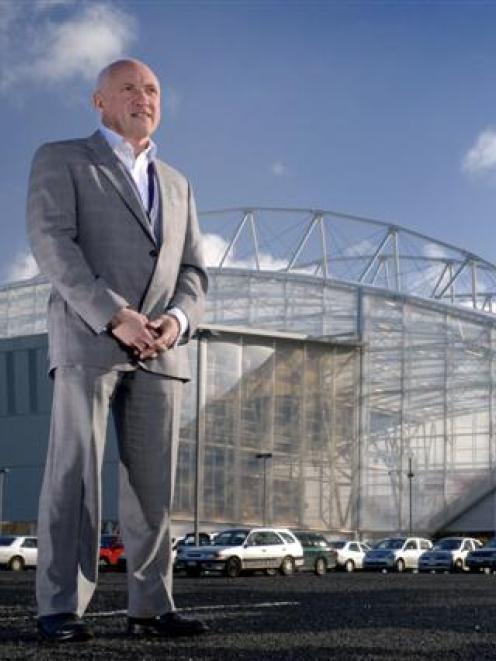 There will be no birthday bash when Forsyth Barr Stadium in Dunedin turns one year old tomorrow.

The controversial venue will complete a turbulent first year which began with a ribbon-cutting ceremony attended by Prime Minister John Key on a cold August 5 morning last year.

To mark the occasion, Dunedin Venues Management Ltd, the company running the stadium, has released new figures showing 350,000 people passed through the venue's gates in the first 12 months of operation.

That was well above initial expectations of about 250,000, DVML chief executive David Davies confirmed.

Crowd numbers were up thanks to the roaring success of last year's Rugby World Cup, Highlanders franchise and Elton John and Otago Daily Times Big Night In concerts.

And when conference and meeting crowds making use of the stadium's south stand lounges were included, the attendance figure rose again, to about 375,000, he said.

It was a level of community buy-in for a new venue that might be a reason to celebrate, if it were not for the bottom line.

That bottom line was a $1.9 million loss booked by DVML in its first six months of operation, and initial projections - since revised - for further losses totalling $3.3 million in the years to 2015.

It was a result that left Mr Davies with mixed feelings when asked if he viewed the first year as a success or failure.

"Of the three of those, we have probably hit two. We know we have done some things OK, but we have got to keep working at it," he said.

It was a sentiment shared by Dunedin Mayor Dave Cull, who identified positives and negatives from the venue's first year of operation.

On the upside, the weather-proof stadium had proved to be a "wonderful venue" for spectator sports of any kind, drawing larger crowds to matches than its dilapidated predecessor, Carisbrook.

The experience had earned rave reviews from far and wide, although that counted for little unless it drew people to the city from outside, he believed.

However, the negatives remained "no secret", after headline losses, overspending and criticism that raised questions about the affordability of the venue for the city, Mr Cull said.

That was in part due to decisions made by the previous council to add the stadium to an already long list of debt-hungry capital projects, he said.

Nevertheless, Mr Cull said the key issue to address in the venue's second year was clear - how to make it pay.

That work was already under way. A review of the business and operating models underpinning DVML and the stadium is to be presented to Mr Cull and his city councillors by Dunedin City Holdings Ltd later this year.

The review will examine how best to minimise operating costs, while maximising revenue streams and community use of the stadium, and its findings could herald major changes.

To solve that, he renewed calls for a full artificial turf to be installed, replacing the reinforced natural turf, to reduce operating costs while maximising use of the venue.

He also wanted match-day DVML staff replaced by volunteers, and cuts to DVML's management and board structure, insurance policies and maintenance programmes, to save money.

"We have got to make sure that the operational costs aren't what the last year has shown them to be. We just can't afford to keep doing that."

Long-time anti-stadium campaigner Bev Butler went further, saying the venue was a financial "disaster" and the council needed a full cost-benefit analysis before deciding whether to close the gates.

"It's a good rugby venue ...but I think the community has been let down, and I think it's still a chain around the city's neck.

"I don't actually have much hope it will improve. If anything, I think it will get worse."

The arguments could form part of the work of a new council subcommittee established to consider the findings of the review of the stadium and DVML, as well as community input, later this year.

Mr Davies believed whatever came of the review would be a critical part of the venue's second year.

However, there were other challenges to be addressed in the meantime.

That included the search for a high-calibre replacement chief executive, following Mr Davies' announcement he planned to return to England in March next year.

That would "clearly" be a key appointment for the venue's future, although Mr Davies could not discuss it.

The wait for a follow-up act to rival Sir Elton also continued, although Mr Davies was optimistic progress on that front could be imminent after "a number of near-misses" during a tough year for touring acts.

He confirmed talks were progressing on two "really good" concerts, with an announcement on one possible in the next "month or so", although details could not yet be divulged.

Talks were also progressing to secure two significant sporting fixtures, including an All Whites clash later this year.

An announcement on one was also possible later this month, he said.

If secured, some of the four events would be held later this year, he said.

The company had already taken steps to improve the experience inside the venue for fans, including efforts to block the worst of the wind coming through gaps in the eastern stand.

More were planned, including installing extra display screens to communicate key information to spectators, he said.

In the meantime, Mr Davies was keen to promote one key stadium statistic buried among the 269 events held in the first year.

Of those events, 150 were either conferences, concerts, trade shows, meetings and social events, and the remaining 119 sporting or community events.

That meant professional sporting fixtures were in the minority at the stadium and 69% of all events staged were considered "community-based", he said.

It was another figure that pointed to DVML's mixed year - a successful number, but a failure to communicate it, he believed.

"The message still seems to be that it's an elite venue, and that clearly isn't the case."

The bottom line would again be the measure in a year's time, and Mr Davies believed the company was in a "much stronger position" to meet its targets over the next year than one year ago.

However, he was cautious enough to warn the challenge remained a tough one.

"We are like any business. We are in a very tough economic position and at any stage things could change."