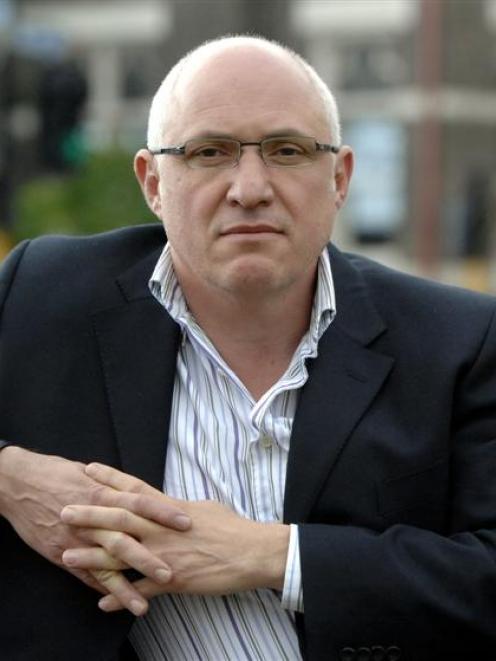 Dunedin Venues Management Ltd chief executive David Davies at the Dunedin Railway Station yesterday. Photo by Linda Robertson.
He took the job knowing it came with its fair share of criticism. He also knew how big a job there was ahead, but the new chief of the Forsyth Barr Stadium, David Davies, is certain he can keep the operation in the black.

"This needs to be seen as the regeneration of Dunedin. There is a quarter of a billion dollars being spent on the stadium and the Dunedin Centre. If that's not a regeneration, I don't know what is.

"I want to make sure the community as a whole is involved. It is more than a rugby stadium."

The Welshman was shoulder-tapped for the role of chief executive of Dunedin Venues Management Ltd, which will see him manage Forsyth Barr Stadium as well as the redevelopment of the Dunedin Centre.

His CV includes roles as chief executive of the Queens Park Rangers football club, London Wasps rugby club, concert promotion and control of the Manchester Arena and, most recently, managing director of DHP Group, specialising in the management of bands, venues and events.

But if his work ethic in the first 48 hours of the job is anything to go by, he will have few critics.

He arrived on Friday and got straight to work on Saturday, spending time "meeting and greeting" representatives from the University of Otago, Forsyth Barr, Dunedin City Council and Tourism Dunedin, among others.

Mr Davies said when he was offered the job he wanted to start as soon as possible.

"I think there is a real job to be done, which is why I took the job when I was offered it."

But he also understood detractors were likely to come with his position.

"I fully understand people are not going to give me two thumbs up within 48 hours, but I hope I can turn some of the negative publicity into positive publicity.

"I think there is always going to be people who see any large civic undertaking in a negative light and there is nothing I can say to change that perception.

"At some stage in the future, I hope they turn round and say 'he was worth every penny'."

Mr Davies said the stadium needed to be seen as more than a rugby stadium.

"For the stadium to be a success, it needs to offer both a good customer experience combined with a community experience."

Mr Davies said he wanted the range of events to be as wide as possible. He listed examples such as a show-jumping event, a military tattoo and a speedway.

Mr Davies has many New Zealand connections, mainly in rugby circles, from his time as the chief executive of the London Wasps rugby club.

His wife, Sonia, and their youngest child, Isabelle (13), will arrive in Dunedin in a couple of weeks. His elder daughters Charlotte (21) and Lydia (19) will remain in the UK to study but are expected to come out for holidays.

He speaks effusively of his new home city but asked whether he will support the All Blacks or Wales in a test and his answer is unequivocal.

"I was brought up by Welsh-speaking parents, and I'm 51 now and that loyalty is never going to change."