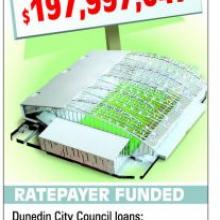 Stadium: How it all adds up
Construction of the Forsyth Barr Stadium in Dunedin will cost ratepayers at least $261 million, updated figures confirm.

The figure is the combined cost to be paid by the Dunedin City and Otago Regional councils, and comes after it was confirmed last week the city council had begun borrowing the $109 million it needs to fund the project.

The new total came from adding the principal of loans taken out by the local authorities and the cost of repaying them.

It does not include some of the more contentious issues linked to the stadium, including whether the realignment of State Highway 88 should be included in the cost, or the cost of buying Carisbrook - an unconfirmed figure of $7 million.

Asked to respond to the figures, Mayor Peter Chin said it was "fair enough" to do the sums calculated by the Otago Daily Times but noted the same exercise could be done with other council projects, including the $104 million Tahuna outfall.

There have been many changes to the way the stadium is being funded in the past two years, including the Government's contribution of $15 million, changes to private-sector funding and a $10 million increase in the expected cost of acquiring land at the site.

But Mr Stephens said the cost of the stadium itself had remained remarkably constant.

He argued the cost of buying Carisbrook should not be added to the list of costs to ratepayers "because the money associated with that transaction was not used to fund the stadium".

"It's a way of dealing with a vacant site."

Mr Stephens said last week the money spent buying Carisbrook could be covered, and even a profit made, depending what decision was made on its future.

The cost to the city council of repaying its $109 million loan was calculated by council financial planner Carolyn Howard yesterday at $95 million.

That was less than Mr Stephens' estimate last week, when he suggested "a rough rule of thumb" was that repayment of such a loan would cost the borrower the same as the sum borrowed: $109 million.

Mr Stephens said while the council was borrowing to cover the shortfall in private sector funding - revenue from sales of products including seating packages and sponsorship - that should not be included in the ratepayers' costs.

"The ratepayer does not make the payments of servicing it [the debt]," he said.

The loan for private-sector funding would be on top of the $109 million the council was borrowing, but the council would not be repaying it - that obligation would be met by sponsors and people buying the seating.

Otago Regional Council director of corporate services Wayne Scott said yesterday the regional council would borrow the $37.5 million it was contributing to the stadium.

Over the 15-year repayment term, ratepayers would contribute $42.4 million through a targeted rate.

Stop the Stadium president Bev Butler said yesterday when approached for comment additional costs could arise from a variety of issues, from landscaping to road-stopping, and providing access to the Otago boat harbour, and questioned whether money put aside for capital maintenance would be enough to pay for the upkeep of the turf under the roof.