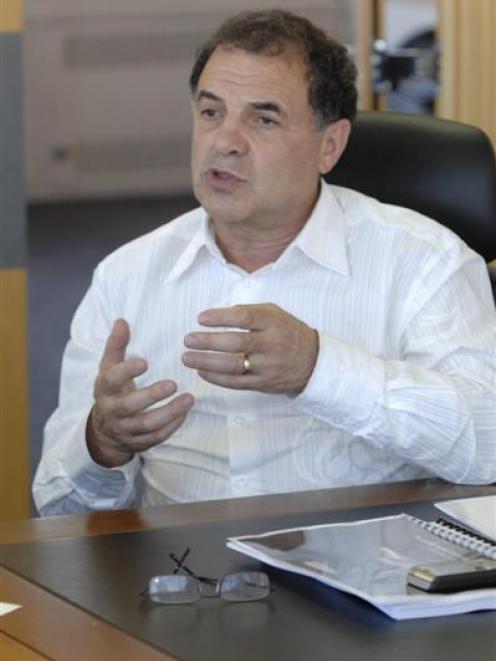 Malcolm Farry
The many rumours about delays in the completion of the Forsyth Barr Stadium, in Dunedin, got an airing yesterday, but the man in charge of the project, Carisbrook Stadium Trust (CST) chairman Malcolm Farry, repeatedly denied there would be any change to the finishing date, or the cost of the project.

During a lengthy questioning, Mr Farry told councillors issues such as extra costs arising from delays were something that had been discussed, adding such matters were part of any major project.

A subcontractor had been paid preliminary progress payments to help it start ahead of time, but that was not an unreasonable course of action, he said.

There had been delays in some areas, such as the lifting of roof trusses, but those were compensated for in other areas, as were aspects of the project that came in over budget, he said.

Mr Farry said despite those matters, the final completion date, and the cost, would not change.

He said he "resented" claims the CST was untrustworthy, and described claims by Greater Dunedin candidate Lindsay Smith on a Facebook site the project was three months behind schedule as "nonsense".

"We've talked about being on time and on budget.

"No-one has asked if some things are ahead of time, and with lower costs.

"There are significant matters with cost savings in them."

The meeting came in the wake of an Otago Daily Times story, in which Mr Farry said timing of the lifting of the roof trusses for the stadium had shifted, but the final completion date had not changed.

Pre-election activity on local websites has increased, with plenty of allegations about the stadium, including that the trust went to the council last week asking for more money, something committee Cr Richard Walls said no councillor knew anything about.

Cr Dave Cull asked Mr Farry a series of questions about the stadium, including whether there had been discussion of costs arising from delays.

Mr Farry said there had.

"That's part of a major project."

He challenged Cr Cull to provide information he had, but Cr Cull said he had none.

Asked last night if he had evidence of delays or cost increases, Cr Cull said he did not, but he said there were acknowledged changes, and "you would assume" if contractors were concentrating their efforts in one area to catch up, that would incur costs.

"I predict if you delay critical aspects of the job to that extent, certainly it's going to have a cost."

Asked if he might not have been told of any serious problems with the project, he said everybody working on the projects had their own interests to protect, with contractors vying for other work in the city.

Asked to respond last night, Mr Farry said the assumption catching up on work would cost money was "incorrect when you consider it's such a large project", and there were opportunities to change focus where necessary.

Regarding Cr Cull's prediction in relation to the delay of critical aspects of the job, he said he was "wrong again".

At the meeting, Mr Farry described some of the claims he had heard as "outlandish".

"I can assure the council and the public there's no problem with the completion date."

"What does everybody not understand about that?"david.loughrey@odt.co.nz