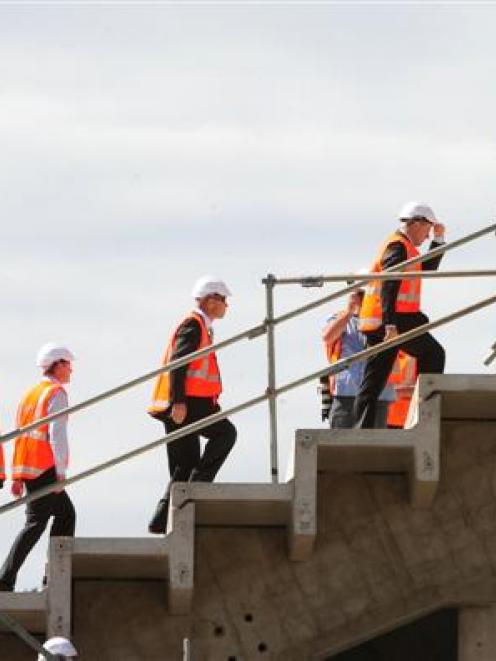 Prime Minister John Key (holding the peak of his hard hat) climbs to the top of the Forsyth Barr Stadium's south stand during a tour of the site yesterday. Photo by Craig Baxter.
Prime Minister John Key yesterday said the Government was unlikely to ask for its $15 million back if the Forsyth Barr Stadium is not finished in time for the 2011 Rugby World Cup.

Mr Key toured the stadium yesterday morning, and his message to opponents of the project was to look long term.

"In 10 years' time if they go to the people of Dunedin and say they want to rip it up and park it in Invercargill, they will have a riot on their hands."

Mr Key's visit did not attract any stadium protesters, though a group of about 20 International Socialists did greet him with a protest about the emissions trading scheme, and the Government's response to global warming.

The issue of whether the $15 million granted by the Government towards the stadium might have to be given back arose after the Otago Daily Times obtained a copy of the grant's terms and conditions under the Official Information Act in August.

The document included a clause that failure to meet construction targets for the project could result in the Dunedin City Council being given just 20 working days to repay the $15 million grant.

When questioned whether the Government might ask for the money back if it was not finished in time, Mr Key said: "I don't think so.

He was effusive in his praise of the construction.

"The stadium is great, isn't it?" he said to waiting media.

With its grant, the Government was "a big supporter" of the project.

Asked what he had to say to opponents of the scheme, he said one of the reasons the Government had invested money was its recognition of the importance of the University of Otago to the city, and the part it played in attracting people.

While there was a cost through rates, that would also be the case if people were not attracted to the city.

The stadium would be "a focal point" for the growth of the university.

Carisbrook Stadium Trust development director Darren Burden said the risk of a cost blow-out with the stadium was becoming "pretty low" as tenders were finalised and the timing of the construction stayed on track.

Mr Burden said work was "all good" to finish in time for the World Cup.