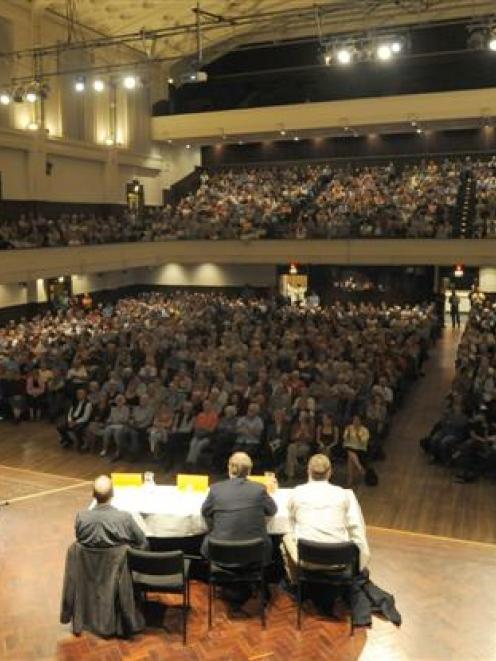 The meeting, organised by Stop the Stadium, heard about the organisation's latest strategy - a plan to withhold the average $66 a year the Dunedin City Council has told ratepayers they will have to pay for the stadium.

The meeting attracted up to 1800 people, with both the ground floor and gallery levels, which seat more than 900 people each, almost full.

Mrs Turner complained about what she said was the "obscene haste" with which councillors were spending money that would drain the pockets of ratepayers for decades to come.

"Dunedin does not need a $200 million temple to rugby to survive as a city."

The average rate increase was supposed to be $66 a year, and, to make the council take notice she urged people to withhold that money.

A pamphlet distributed at the meeting said the strategy had been "confirmed" by the University of Otago faculty of law dean Prof Mark Henaghan as a "no-risk, low-cost means of protesting" to the council.

People should deduct $16.50 each quarter, which would attract a 10% annual penalty of $6.50, "but we think that there is no cheaper or more effective way of delivering a serious message to the council".

Asked after the meeting if that amount of money would make a difference, Stop the Stadium president Bev Butler said it was not so much the money as the message behind the action.

"It's to show the majority of citizens do not support the stadium."

Mr Broad said nobody knew what the stadium would cost, most households in Dunedin could not afford the rate rise to pay for it, the stadium would cost ratepayers' money to run, and there were many better ways to spend the money, including keeping the Highlanders at Carisbrook, buying the former chief post office, getting "Third-World" buses off the main street, putting State Highway 1 underground at the University of Otago, or reinstating trams.

Cr Eckhoff said the the stadium was designed to provide for the New Zealand Rugby Union and its international partners, despite them having no monetary input.

The public consultation on the project was a "sham" and the councils should have set up public focus groups and facilitated meetings between the Carisbrook Stadium Trust and those who opposed the project.

Mr Stedman said there had been a lack of detail and "non-partisan evidence" on what the stadium would be used for, and there were questions over whether the Otago Rugby Football Union would be able to pay to hire the stadium, as it was "failing dramatically".

Dr Hamlin said the money the trust had raised from seating packages was not capital, but revenue.

He said building companies were not insurance companies and could not provide certainties on the cost.

Cr Dave Cull said the total project cost had risen by $10 million, the guaranteed maximum price contract offer contained loopholes that could expose the council to risk of price increases, a contract had not been finalised with the University of Otago, nor had an occupation and revenue agreement been signed between the Otago Rugby Union and the trust.

The meeting ended with a standing ovation for the speakers.