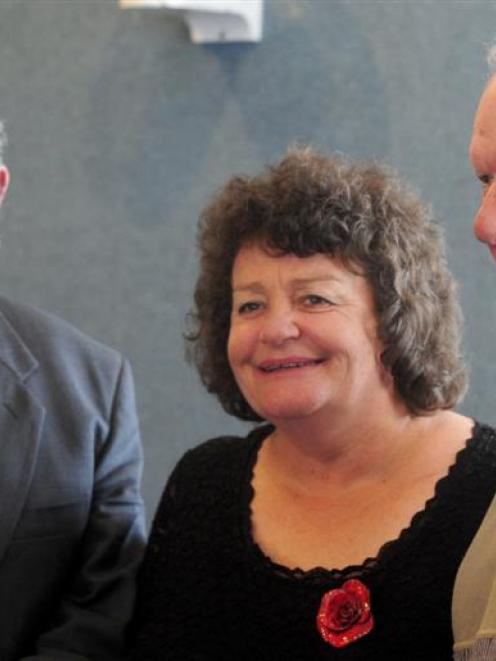 Presenting submissions for Stop the Stadium at the stadium plan-change hearing in Dunedin yesterday are (from left) Brian Miller, Bev Butler and Keith Mattingly. Photo by Craig Baxter.
From business closures to international terrorism and student riots caused by rain, yesterday's stadium and arterial route plan-change hearing in Dunedin heard an unusually wide range of arguments in opposition to the projects.

Stop the Stadium had its chance to convince the commissioners the project should not proceed, and more arguments against closing Anzac Ave were raised.

The meeting heard turning the avenue into a cul-de-sac at Frederick St could mean the closure of two businesses, one of which - the Mobil service station - complained bitterly about what the company's counsel said was a lack of meaningful consultation.

Brian Miller, for stadium opposition group Stop the Stadium, came up with the unusual argument that terrorism might be a concern, noting the stadium would be built near lpg and oil facilities.

"Conceivably, the lpg and petroleum storage facilities could be the target of some disturbed religious or political fanatic; their actions appear to have no boundaries and are able to reach all corners of the globe."

He also questioned the design of the stadium in his submission.

The "deafening" sound of rain would make hearing whistles during play almost impossible, and students would be unable to hear concerts, resulting in unrest, he said, citing his experience as a horticulturist with greenhouses.

"The media would have another field day with reporting another student riot in Dunedin."

Asked about evidence from the council's experts on some issues he raised - Mr Miller did not attend the hearing to listen to that evidence - he said he either did not believe it, or required more scientific proof.

The main plank of Mr Miller's argument was the need to retain industrial land in Dunedin.

"University sprawl" was affecting industry and the stadium plan-change should be declined on those grounds, he said.

Former Dunedin Drainage and Sewerage Board inspector Keith Mattingly, also for Stop the Stadium, said he believed a boxed culvert went under the stadium site.

"The grass area could be flooded if this is not sorted out and found."

That could mean the field would become polluted, he said.

Asked if good design and engineering could fix the situation, Mr Mattingly said it could but "at a heavy cost".

Stop the Stadium president Bev Butler argued the Resource Management Act's "ethic of stewardship" was relevant to the plan change.

She read from the Act, which stated its purpose included promoting sustainable management to provide for the community's "social, economic and cultural wellbeing".

Financial and economic considerations were, therefore, "entirely relevant" for an Environment Court hearing, and should inform the commissioners' deliberations on the plan change, she said.

"The proposed stadium and the proposed plan change to help make it come about is in the wrong place, at the wrong time and done for the wrong reasons."

Our Stadium Supporters club secretary Tim Calder, giving his personal submission, asked the commissioners not to listen to a "noisy minority", and allow the plan change to proceed.

"It can be used as much as we want it to be. It's up to our own imagination."

Automotive Solutions' Robert Le Brun, whose business is at the Mobil service station, said it would be badly affected by the new gyratory suggested as part of the arterial route.

The hearing has heard turning Anzac Ave into a cul-de-sac, cut off at Frederick St, would reduce passing custom for the service station, adversely affecting his family and six staff.

While there was industrial land to relocate to, he had been unable to find any with the sort of exposure to passing custom he had at the service station.

Counsel for Mobil Oil, Daniel Sadlier, said the notice of requirement would mean the end of the service station.

Also, "no meaningful consultation was entered into with Mobil", he said.

Repeated requests to the council for information had not been heeded until two weeks ago, and what was provided was insufficient, he said.

In response, commissioner John Matthews noted, "Every single hearing I've ever done, there's someone who says the proper consultation has not been done."

Mobil asked for the notice to be withdrawn, a fresh notice that complied with the Act to be issued, and for the council to retain through traffic on Anzac Ave.