Students will get code of conduct 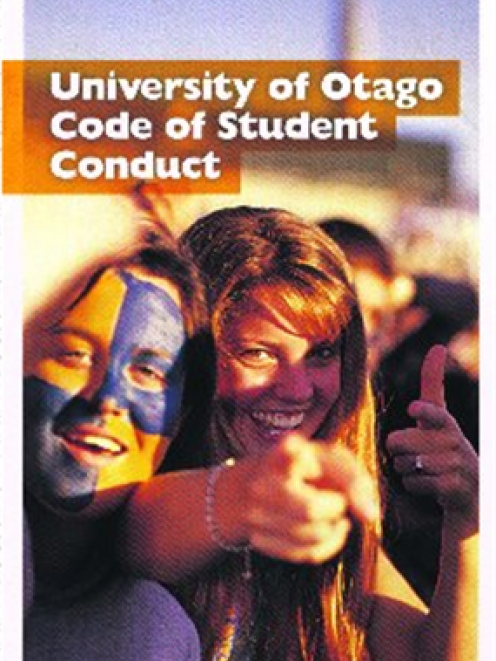 The material may become bedtime reading for incoming students. A pamphlet outlining the rewards of responsibility and the perils of bad behaviour is destined for every residential college bed next year.

University of Otago vice-chancellor Prof Harlene Hayne said 10,000 copies had been printed to go out to students.

The "recent initiative", which also involves backing from the 14 residential colleges for new students, was unveiled to university council members at a meeting yesterday.

The pamphlets provide contextual information about the code of conduct and also outline the university's "pastoral responsibility", to look after its students, she said.

The student body was "refurbished and replenished" on a regular basis and the pamphlets were the "first attempt ever to communicate the purpose of the code of conduct," she said.

The pamphlets will be included with each offer of residential accommodation to prospective first-year students.

"We hope it will make its way home and even gets discussed around the dinner table," Prof Hayne told council members.

A copy would "be placed on the bed of every incoming student" at residential colleges, she added.

The pamphlets, which cost $1300 to print, contain information about student services, such as Campus Watch, alcohol and drug counselling, and advice about the risks associated with making bad decisions.

Prof Hayne said it was intended for the pamphlets to also be sent to student flats around Dunedin and discussions with the Otago University Students Association were taking place to help make that happen.

The code of conduct, which sets out rules, regulations, and disciplinary measures pertaining to student behaviour, was introduced in 2007 as one response to disorder in the student quarter and other alcohol-fuelled bad behaviour.

The code's introduction was initially viewed as a controversial move and was opposed by the OUSA, but attitudes have since changed.

The OUSA's initial stance has been watered down to a neutral position after a series of student referendums, while code initiatives, such as Campus Watch, are now supported by the incumbent student executive.

Since its inception, 24 students have been excluded from the university under the provisions of the code of conduct.

Nine students have been excluded for incidents which were related to fire-lighting, while 21 of the 24 cases involved alcohol as a "significant contributing factor," the brochure states.