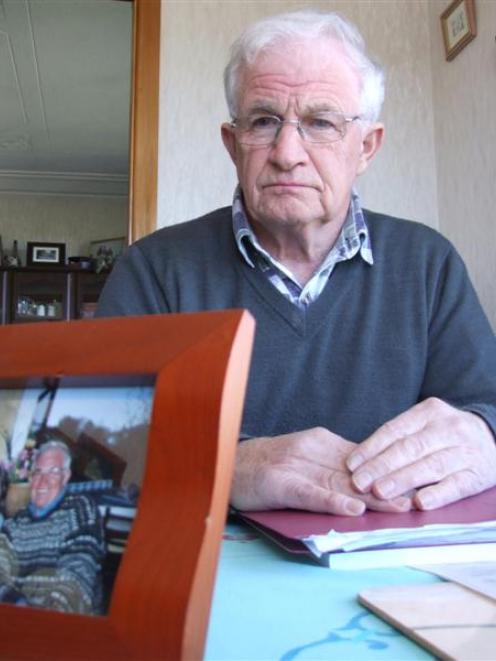 Just because it is a law it does not make it right, widower Fin Heads says of his battle with ACC to get his superannuation reinstated.
Making a grieving man choose between his dead wife's ACC compensation and his own hard-earned superannuation is "obscene" and tantamount to theft, Dunedin widower Fin (Findlay) Heads says.

Mr Heads, of Abbotsford, is frustrated and angry after what he says has been more than nine months battling Government departments, and the complex legislation they operate under, to get justice.

Ten months after his wife Shirley was killed by a careless driver, Mr Heads was told he could have either his superannuation or ACC compensation but not both.

He wants both restored, the law changed, and other people in similar circumstances compensated.

ACC Minister Nick Smith and Minister for Social Development and Employment Minister Paula Bennett have declined to comment until they have more information about Mr Heads' situation.

Spokespersons for Dr Smith and Ms Bennett said they were not yet able to respond to Mr Heads.

"The minister is seeking more information to ensure everything has been handled properly in this case," Ms Bennett's spokeswoman said.

Dr Smith's spokesman acknowledged it was "a unique situation and requires closer examination".

"We invite Mr Heads to contact our office directly should he wish to."

Revenue minister Peter Dunne said he had "every sympathy for Mr Heads' position" but that none of the issues raised were "within the responsibility of Inland Revenue".

A spokesman for Justice minister Simon Power said the issues were not relevant to that portfolio.

On April 28, 2008, Mrs Heads was killed by a truck while crossing the intersection of Great King and Hanover Sts, Dunedin.

Her death, 37 days before she was due to retire, was deemed a workplace accident.

The driver was convicted of causing the death of Mrs Heads by operating a vehicle carelessly.

"I was traumatised," Mr Heads, who had retired after 50 years work as a plumber, said.

"Prior to that, I could think things through clearly.

"I took about 13 months before I started to think clearly again."

For 12 months, Mr Heads received his superannuation and his wife's ACC compensation, but towards the end of that period he received a letter from ACC saying he would have to opt for one or the other.

He chose the compensation because it was worth "a few more dollars".

ACC told him the compensation, or a lump sum equivalent, was payable for five years, after which his superannuation would be restored.