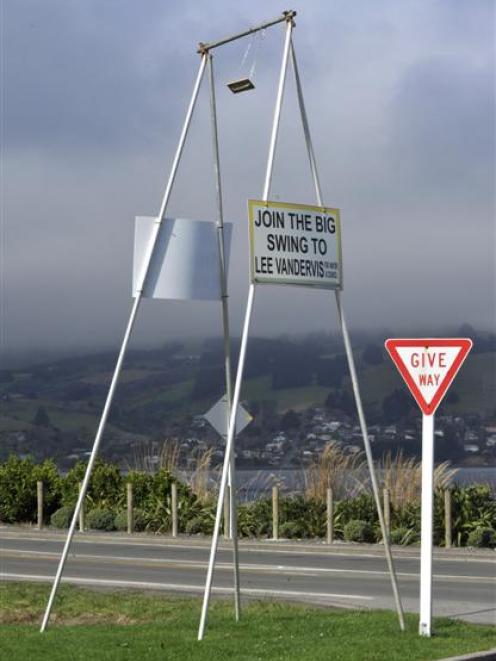 The swings appeared around Dunedin during the weekend, with three of the large steel structures installed at Maia, Mosgiel and Caversham, and five smaller sets elsewhere around the city.

Mr Vandervis, who is standing for mayor and as a city councillor, said he had received a "fabulous" response to his promotion.

However, the swings had also raised a few eyebrows among council staff, who told the Otago Daily Times they would be talking to Mr Vandervis about ensuring the swings were safe.

Council resource consents manager Alan Worthington said the swings complied with rules governing election signs, which restricted signs - but not the structures that held them - to a maximum size of 3sq m.

"The rule is about the size of the sign ... There's no direction in the rule about what you attach it to."

"In all honesty, we have no real interest in it so long as they're not dangerous.

"They are a very lightweight structure ... so long as they're not going to blow away, then we have no real issues with them.

"And I would suggest there's less chance of them blowing away than some of the big solid signs."

Mr Vandervis said he had carefully checked election rules before installing the swings, and his signs measured only 1sq m.

"It doesn't even begin to break any rules," he said.

The larger frames were made from old scaffolding pipes, secured together by studs and by bolts into the ground, and were "absolutely solid as a rock", he said.