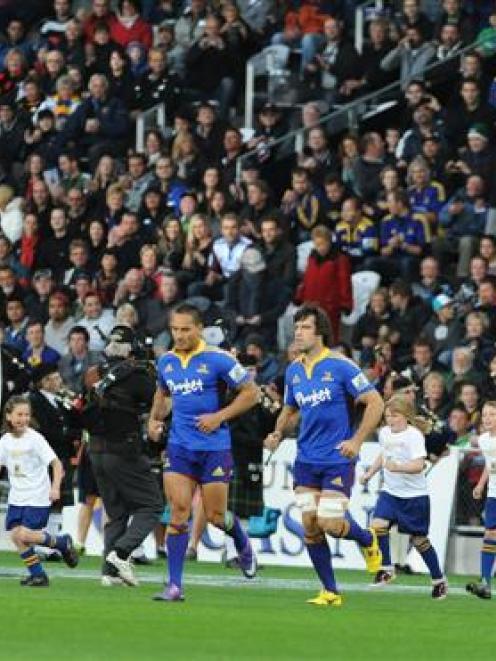 The Highlanders run on to the field on Saturday. Photo by Jane Dawber.
Incorrect timekeeping on the big screen led to some knife-edge tension at Forsyth Barr Stadium on Saturday night.

While neither stadium officials nor any sneaky Crusaders fans were to blame, the human error was critical for the 22,500 people watching the game between the Highlanders and the Crusaders.

The home side was leading 27-24, with the clock on the stadium's big screen signalling 80 minutes - time up, in other words.

But, as any schoolboy player can tell you, the sole judge of time is the referee, and Jaco Peyper said there were three minutes left. Unfortunately, the clock at the stadium had not included any stoppage time in the second 40 minutes.

With 80 minutes showing on the stadium clock, twice the Highlanders kicked the ball out, thinking that would lead to Peyper's whistle blowing fulltime.

But the game had to continue, and the Crusaders had the ball and the opportunity to steal a draw or even a win.

Highlanders halfback Aaron Smith, the second player to deliberately kick the ball out thinking it would mean fulltime, said it was confusion all round.

Crusaders first five-eighth Tyler Bleyendaal had a drop kick to try to tie the scores up, but it floated wide.

"We had 80 minutes on the clock ... so it would not have been nice if we had lost the game thinking we had played an extra three or four minutes," Joseph said.

The big-screen operators had put systems in place for the Phoenix football game, but had forgotten the clock stopped for injury breaks in rugby.

"It will be easily dealt with.We'll make sure we have a feed to Sky Television, so the guys in the big-screen room know their clock is right," Mr Taylor said.

While the Crusaders nearly benefited from the mistake, coach Todd Blackadder was not impressed.

"It was very amateurish in what is a professional game," Blackadder told APNZ.