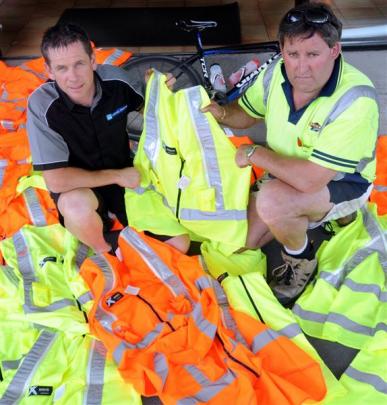 Cycling Otago president Chris Henderson (right) with Dunedin truck company manager Tony Gare, who has bought hundreds of high-visibility vests to give away to cyclists. Photo by Craig Baxter.

A Dunedin trucking company is acting on its concerns about the visibility of cyclists around the city by giving away hundreds of high-visibility vests to cyclists.

Tony Gare, the general manager at container transport company Icon Logistics, said when he received a call on November 22 to say one of his drivers had struck a cyclist on Strathallan St, his heart sank.

"To come around that corner and see that bike under the truck and look around trying to find the person who'd been riding it, it's not a good feeling."

One thing that was highlighted by the incident, in which the cyclist received minor injuries only, was that he had been wearing dark clothing.

"If he had been wearing high-visibility clothing instead, the crash might not have happened."

There were many cyclists in Dunedin who did not wear the visibility gear, he said.

So Mr Gare bought several hundred high-visibility vests, at a cost of about $50 each, to give away to cyclists.

"If, at the end of the day, it's going to save someone's life, it will be worth it."

He contacted Cycling Otago president Chris Henderson, who offered to let interested people collect the vests from his workplace.

Cycling Otago was a competitive cycling group, whose members were possibly a little more aware of how to keep themselves safe and cautious on the road than city cycle commuters, and always wore bright clothing while riding, Mr Henderson said.

However, Mr Gare's initiative was a great one, and there was certainly some room for cyclists to take more responsibility for their own safety.

"At least they (the trucking company) are doing something, and cyclists have to do something themselves too. To get respect you've got to give some respect."

It was his opinion that there needed to be more road-safety education for cyclists in general.

The free vests, available in adult sizes only, can be collected from Midway Motors on Kaikorai Valley Rd.

Mr Gare said his driver was scheduled to appear in the Dunedin District Court next month in relation to the Strathallan St incident.

• A 33-year-old Invercargill man has been charged with careless driving causing death, after cyclist Peter Wells was killed when hit by a logging truck in Castle St on November 14. He will appear in the Dunedin District Court on January 24.