Wave to cameras, farewell to wave 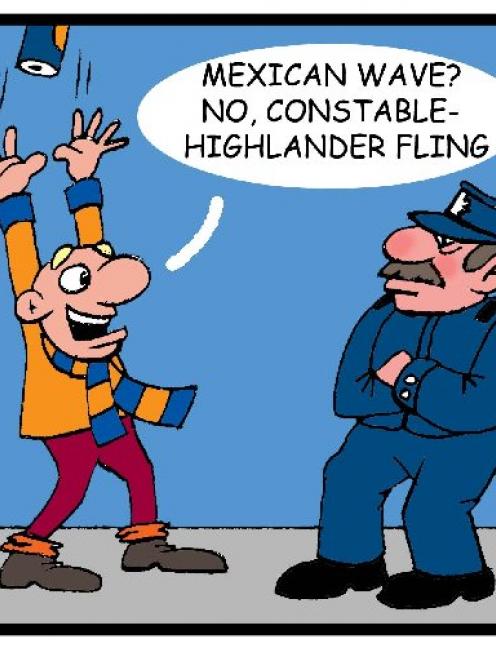 Smile for the CCTV cameras at Dunedin's new stadium - but maybe say goodbye to Mexican waves.

Planning includes having the armed offenders squad on stand-by, extra protection for visiting dignitaries, and a possible crackdown on people starting Mexican waves.

Police will be testing their world cup procedures at the stadium at pre-tournament matches between North Otago and West Coast, Otago and Manawatu and Otago and Canterbury.

"It is about getting a feel for the new stadium," he said.

Police would also be "upping their numbers" during matches at Carisbrook, including this week's Highlanders v Lions game, and the July 22 match between the All Blacks and Fiji.

Insp Dickie said up to 50 police could be stationed in the stadium to monitor crowd behaviour and liquor outlets and to be prepared for any "embarrassing moments" that might arise.

"The international media are going to be there. We don't want any embarrassing moments. We need to try to minimise that and have sufficient resources to deal with any risks."

He confirmed preparations were under way for any visiting VIPs, but declined to comment further.

Police in Dunedin and Wellington would monitor crowd behaviour on CCTV cameras, with staff looking for anything that might endanger the safety of others.

Insp Dickie said in regards to the Mexican wave "we have to minimise and discourage them from doing it because it could lead to problems of objects being thrown on the field".

"It's not a good look to have all these things thrown on the field on international television.

"You see a certain area of the crowd attempting to get it going and that is where we need to be quite prompt in getting in there and discouraging it from turning into a full blown exhibition."

However, he stopped short of calling for a ban of the popular crowd pastime.

"We do want people to enjoy themselves and have a good time, within the bounds of the law, while being mindful of the safety."

Asked if there was a possible "hotspot" at the new stadium similar to the terrace at Carisbrook, Insp Dickie said the north stand could be challenging.

"It is quite steep, and could create some issues for us."

Police were hoping alcohol sold at the ground would be in plastic bottles.

However, a World Cup spokesman confirmed it would be sold in cans.

Police were also mindful of pitch invasions at Otago Stadium, and games would feature a large security presence in the 6m gap between the crowd and field.

He confirmed the armed offenders squad might ay be on stand-by during matches, and tasers would be considered an option for some officers if "we had intelligence suggesting there would be a problem".

Police would would be supported before and after games by other district staff, Maori wardens, community patrols and volunteer guides.

"Things get a bit more testy in the early hours ... people have a bit of alcohol in their systems and you get niggly little situations where people don't agree with each other," Insp Dickie "Alcohol is something we need to focus on strongly, as far as our resources are concerned."

A traffic management plan for the venue, which included public transport, pedestrian access, parking, and access for emergency services vehicles was being worked on.