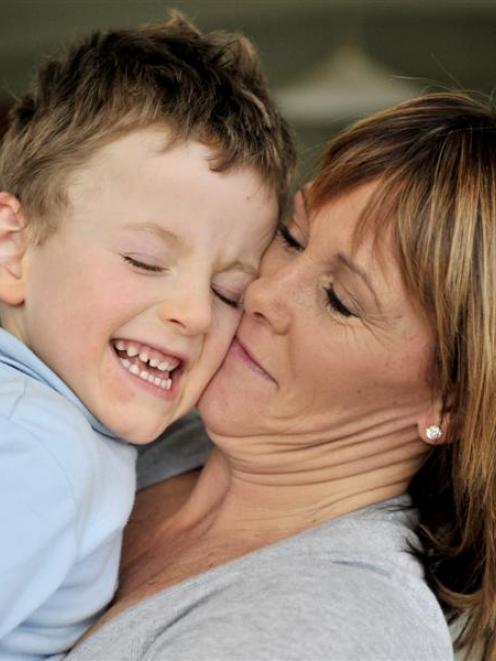 Caleb Turner with mother Shirley, who wants neurosurgery services to be retained at Dunedin Hospital. Photo by Gerard O'Brien.
When it comes to brain injuries, time is of the essence.

No-one knows that better than Dunedin woman Shirley Turner, whose son Caleb has undergone 13 neurosurgery operations in his four years of life.

When Caleb was just 2 days old, he suffered a massive brain bleed, leaving him with severe cerebral palsy.

After initially draining the fluid with a needle, doctors decided he needed his first neurosurgery, at the age of 3 weeks, to install a drainable reservoir.

His next surgery, at 5 months, was to install a shunt, which would drain fluid into his abdomen.

Surgery was needed periodically to fix the shunt.

A second shunt was also installed.

His most recent trip to hospital was in September last year.

Mrs Turner knew something was wrong and believed it was a problem with his shunt.

Doctors at Dunedin Hospital were not sure what the problem was and, with no neurosurgeon available, the pair were flown to Christchurch.

What started as a single operation, turned into three.

Mrs Turner and husband Lindsay had to leave their two other children at home to be with Caleb.

Away from home and the support of family and friends, Mrs Turner struggled to cope.

"It adds that extra stress. It's bad enough anyone going through brain surgery, let alone having no family or friends there. I just wanted to be home."

Not knowing any of the hospital staff was hard on both her and Caleb, as was having to repeatedly outline his history.

Caleb has been fine since his most recent surgery, but she does not want to have to travel for treatment again.

The problem was that they did not become aware of a shunt failing until it was acute.

"I don't want to be in that situation again. For Caleb, he would end up with more brain damage. We can't afford that to happen," Mrs Turner said.

Mrs Turner supported having a permanent unit based in Dunedin.

"When it's with your brain, time is of the essence. It doesn't take long for the brain to start dying."

Without a permanent neurosurgery unit in Dunedin, the Turners would be forced to move from their wider family base to Christchurch, Mrs Turner said.