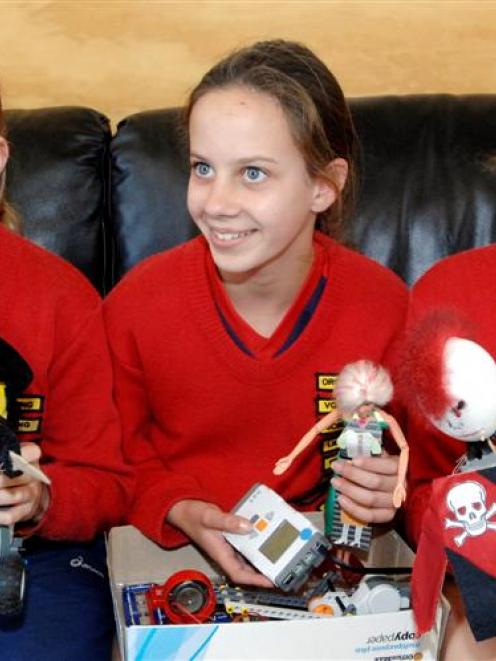 Balmacewen Intermediate pupils Annabelle Ritchie (12), Lucy Cathro (11) and Holly Armstrong (11) with the James Bond scenario robots, which won the junior dance category at the New Zealand Robocup final in Wellington. Photo by Linda Robertson.
The idea of James Bond dancing it out with the bad guy to win the girl may seem absurd.

But Balmacewen Intermediate pupils Annabelle Ritchie, Lucy Cathro and Holly Armstrong made it happen in Wellington last weekend when they programmed robots dressed as Bond, Mr Baddie and Barbie to dance in the New Zealand Robocup Competition.

And the three also did a dance of their own when their programming won the dance category of the national competition for primary, intermediate and secondary school pupils.

Annabelle said they spent about six months building and programming the robots to dance to the James Bond theme tune.

The dance starts off with Mr Baddie (complete with mean eyes, a red mohawk and cigarette hanging from his lip) setting off a soda bomb, then picking a fight with James Bond (who has a magazine cutout of Daniel Craig for a face).

Bond wins the fight and gets to dance with the girl.

The Balmacewen trio, otherwise known as Dynomyte 2, was not the only Otago team to impress the judges at the national final.

And Tahuna Intermediate pupil Philip Anderson was third in the junior soccer category.

The Robocup national final was to have been held in Christchurch on September 4.

But the magnitude 7.1 earthquake which hit Canterbury resulted in the event being postponed.