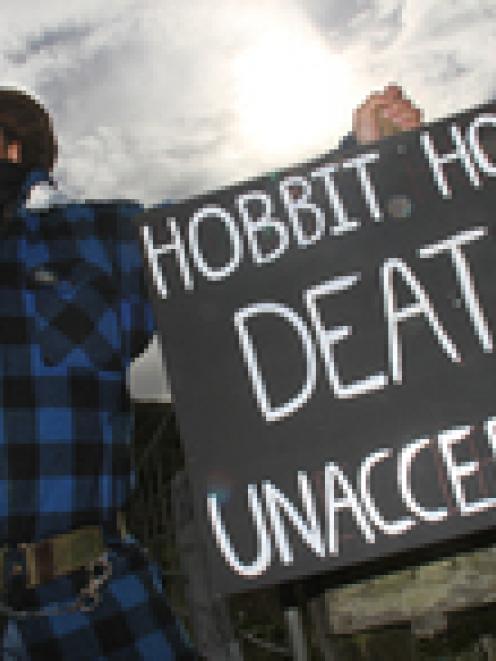 John Smythe's former colleagues say he kicked a pig in the head and used spurs on a horse despite it being against policy. Photo / Andrew Bonallack
A wrangler at the centre of claims animals were mistreated during filming of The Hobbit stands by his allegations, but says he never intended "tarnishing" the movie or Sir Peter Jackson.

It has been revealed that after John Smythe was sacked from the production, crew members who worked alongside him gave written and signed statements about his "antisocial and threatening" behaviour towards them and some of the animals he was working with.

Mr Smythe worked on the farm where animals used in The Hobbit were being housed but was dismissed last October. Earlier this year he alleged at least 26 animals died from mistreatment, which caught the attention of international rights group People for the Ethical Treatment of Animals last week.

Peta has now called on members to stage protests at international premieres of The Hobbit, which begin in Wellington next week.

Mr Smythe told the New Zealand Herald he had been dismissed because he did not get along with his manager's wife, and he refused to keep his concerns about the treatment of the animals quiet.

He said he and a number of other wranglers were worried and angry about conditions on the farm, and spoke to management.

"We were told to keep our mouths shut," he said.

"I never intended to tarnish the movie or Peter Jackson. But I couldn't stand by and let the same thing keep happening."

He said none of the wranglers reported what was allegedly happening at the farm to the SPCA as they were scared they would lose their jobs.

But the statements given by his former colleagues paint a different picture of Mr Smythe's time on the farm.

"Leroy the pig was brought back into work with John assisting. They were putting him in the yards when Leroy started growling. John kicked him in the head. He did it again and the owner told him to stop and John left," one colleague reported.

Another said: "We had to repeatedly remind [Mr Smythe] that the use of spurs was not permitted on our horses."

A female wrangler stated: "He has been intimidating, threatening, and I have feared for my safety ... I have asked never to be put in a situation where I have to work alone with him."

Mr Smythe denied any threatening, violent or inappropriate behaviour towards people or animals.

"My answer to that is - why weren't the police called in? It's all lies. There was no threatening behaviour, no abuse of animals on my behalf. I raised concerns and I was told to do my job or pack my bags - I did nothing wrong."

He rejected suggestions he was bitter about his dismissal and the allegations were pay back.

"This is not a case of sour grapes, it was genuine concern for the animals' welfare ...

"I know that my name's going to get mucked upon, but I never wanted it to go this far. But had the producers acted on our concerns in the first place it never would have come to this. That's all we wanted."

Sir Peter's spokesman, Matt Dravitzki, could not comment on the specifics of Mr Smythe's dismissal or the allegations, which the film company labelled "unsubstantiated".

But he confirmed that all information relating to the farm, the animals and staff including those who were dismissed had been offered to the SPCA. He welcomed an investigation and said there was "nothing to hide".