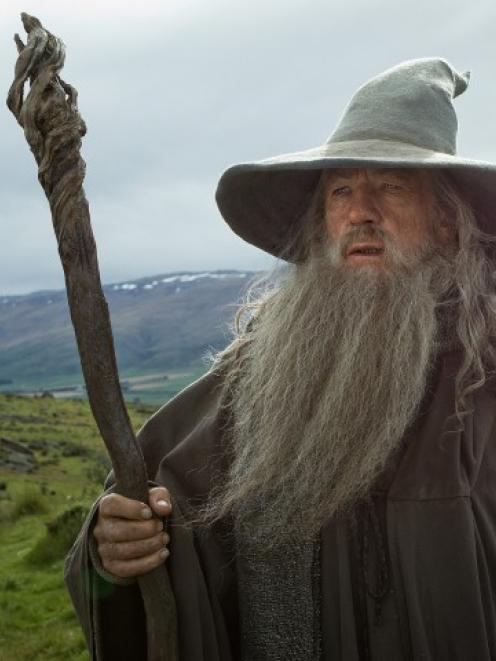 Sir Ian McKellen stars as Gandalf in the 'Hobbit' movies. Photo MCT
Air New Zealand says it is already benefiting from The Hobbit, even before the movie's wide release.

The airline paid for the rights to be the "official airline of Middle-earth" and has staked much of its marketing push for the next two years on the trilogy accompanied by themed planes and passenger experiences.

Bookings in the United States almost doubled the day before last week's world premiere in Wellington and bookings were up by a third in Japan following a Hobbit promotion.

And Tourism New Zealand, which is spending $10 million promoting The Hobbit trilogy, says visits to its website using Hobbit-related keywords were up 265 per cent last month compared with the previous three-month average.

Air New Zealand's deputy chief executive Norm Thompson said the response had been significant, especially in the US.

The airline runs "cyber Monday" promotions there, offering deals to top up flights and last week, when its website featured its Hobbit marketing, bookings increased 95 per cent.

Just on 600 extra seats were sold than on other cyber Mondays.

He said The Hobbit appeared to be a catalyst for those who wanted to visit taking the plunge.

"The States is a frustrating market," Thompson said.

"Being able to hook into something like The Hobbit encourages them to tip over the line and make a commitment."

Those bookings were for the March to September low season.

In Japan there was a surge of bookings coinciding with a 48-hour "Hobbit-size" fares promotion.

In Europe the response had been slower, where there had been increased interest in the airline's website but not so much conversion to buying tickets, Thompson said.

Air New Zealand was expecting tens of millions of dollars in extra revenue from the movies, not only for the next two years as the trilogy is released but for the lifetime of the J.R.R. Tolkien theme.

"In Japan people are still talking about the Lord of the Rings - it's quite enduring."

The airline paid Warner Bros to use imagery from the movies as part of its overall marketing budget.

Thompson said critics of the big Hobbit push "had to get on board".

"We wouldn't do it if we felt it was doing damage to our brand or the country. It's a bit like Rugby World Cup - you get behind it."

One Queenstown jet boat operator's tours pass the "misty mountains" area featured in the Lord of the Rings and which was the site of filming for The Hobbit.

Nigel Kerr, the marketing manager from Dart River Jet Safaris, said while the Hobbit movies would be good for the country, it was difficult to tell how his business would benefit directly.

"We know we're going to appear but it's a matter when and how much. You can't assume anything until you're on the screen."

Sales of Hobbit merchandise in the town had picked up and one or two busloads of fans who had been at the premiere were arriving this week.