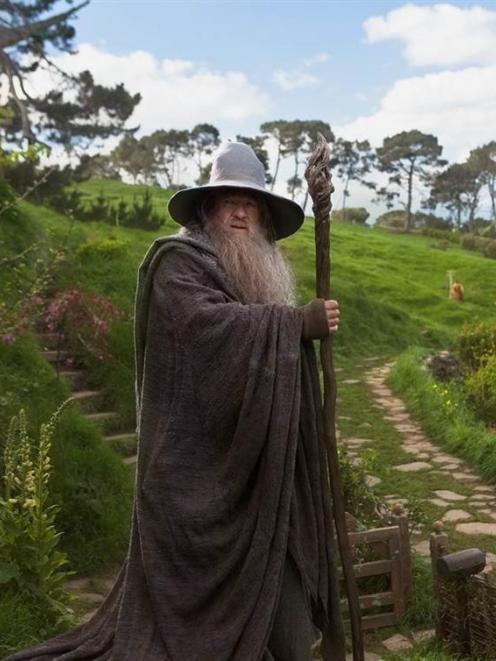 The movie's associate producer and general manager of Wingnut Films, Matthew Dravitzki, presented the clip to national and international media at Trenz in Auckland this week.

Footage of Otago locations used in the film were accompanied by complimentary comments from main actors and crew members.

They described Queenstown as ''astonishing'' and ''a beautiful jewel at the bottom of the world'', and remarked on Central Otago's wild lupins, sweeping tussock and unspoiled 360-degree vistas.

Strath Taieri featured in scenes where dwarfs were chased across rolling tundra and director Peter Jackson spoke of its perfection as a set environment.

''Many of the actors have become ambassadors for the country. Fans hope to visit the exact spot where particular scenes were shot, and they can, because unlike a Hollywood theme park, New Zealand is a real place that visitors can embrace and explore for themselves,'' he said.

The six-minute clip was a special feature of The Hobbit DVD and was made especially as a promotional tool for Tourism New Zealand.

Tourism growth from the Lord of the Rings trilogy was being built on via The Hobbit, which attracted international media coverage New Zealand could otherwise only dream of, she said. It included 14-page spreads in Lonely Planet and equated to about $25 million in investment.

Online travel company Expedia reported an 84% increase in the number of visitors to New Zealand last December, when The Hobbit premiered, compared to the same month in 2011.

The information centre in Matamata, where Hobbiton was created, had gone from 30,000 annual visitors 10 years ago to 300,000.

For the past decade, the company has offered tours of locations where scenes from the Lord of the Rings trilogy were filmed.

Visitors interested in the film's locations included wealthy Americans who tended to visit only Queenstown and spend more than a week there, he said.

''It's great for the town because they have a lot of money and they're intent on spending it.''