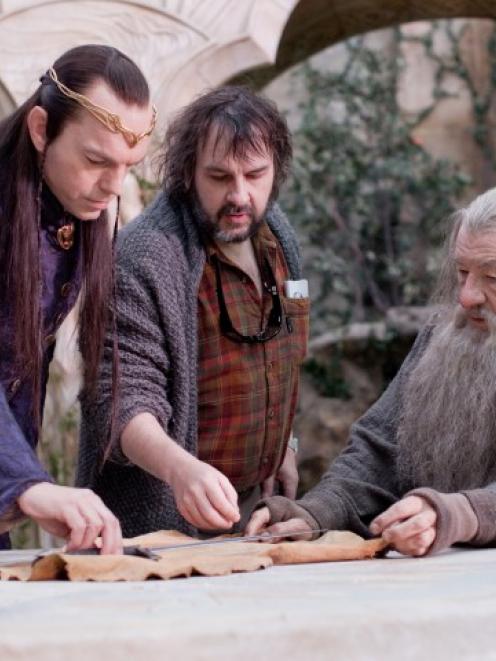 Hugo Weaving (L), director Peter Jackson (C) and Ian McKellen are seen on the set of 'The Hobbit: An Unexpected Journey'. Photo MCT
A majority of New Zealanders polled by the New Zealand Herald back the $67 million in tax breaks given to the producers of The Hobbit by the Government - but only if the films return more than that to the local economy.

Only one in five people surveyed in a Herald-DigiPoll poll completely opposed the subsidies given to Hollywood studio Warner Brothers for the making of The Hobbit films.

The poll showed New Zealanders were not highly concerned about the principle of giving tax incentives to an overseas company, but they would be concerned if the costs of this subsidy were not recovered.

Asked which statement best fitted their view on the taxpayer subsidies for The Hobbit, 65 per cent of respondents chose "It was worth it only if the New Zealand economy gets more than that amount back".

Economic Development Minister Steven Joyce said the poll showed that New Zealanders understood the value of the films to the economy.

"We have been confident all the way through that these movies would be good for New Zealand and ... certainly the box office internationally over the last few weeks has underlined that."

The first film in the trilogy, The Hobbit: An Unexpected Journey, has earned US$959 million ($1.15 billion) worldwide, a third of this in the United States where it was showing in 4000 cinemas.

It was no longer the most popular film in the US, but it remained at the top of the New Zealand box office, where it had earned $8.3 million in its first three weeks.

Mr Joyce said he believed tax breaks would be easily eclipsed by increased income taxes generated by the movies and the greatest benefits would come from indirect sources such as increased tourism.

The National-led Government controversially changed employment laws and granted tax breaks amounting to $67 million to Warners in 2010 after director Sir Peter Jackson warned The Hobbit franchise could be moved to countries where it was cheaper to film.

Labour Party spokeswoman for labour issues Darien Fenton said her party supported the tax breaks but not the changes to employment law. But she questioned why the Government was prepared to single out the film industry for incentives as opposed to other sectors which could provide highly-paid, skilled jobs, such as manufacturing.

Prime Minister John Key has defended the deal with Warners, pointing to the employment of 3000 people during the filming and the $100 million spent by the studio on marketing the films.

ANZ-National predicted that if The Hobbit films had been moved to another country, it would have led to $1.5 billion in lost revenue from potential jobs, sub-contracting positions, and local supply of goods and services.

Nearly 15 per cent of those polled said it was worth giving tax incentives to film-makers even if the subsidy was greater than the amount of wages and taxes paid in New Zealand.