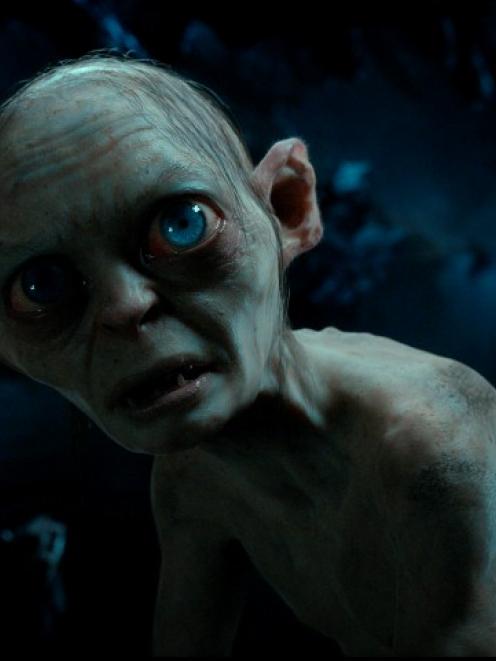 The British-born actor, 48, who rose to fame as the obsessive Gollum in Jackson's "The Lord of the Rings" trilogy, spoke with Reuters about playing the popular CGI character, and his role behind the camera in New Zealand for "The Hobbit."

Q: Was it nice to get re-acquainted with Gollum after almost 10 years?

A: "Yes, but he's never been that far away from me. Not a day goes by where I'm not reminded of Gollum by some person in the street who asks me to do his voice or wants to talk to me about him. But because 'The Hobbit' has been talked about as a project for many years, I knew that at some point I'd have to reengage with him."

Q: Martin Freeman (Bilbo Baggins) is new to the franchise and so are many other actors. As a veteran, did they come to you for advice?

A: "It sort of manifested itself more in a way where (as a vet) you understand the scale and scope of what's required stamina-wise. It's a different rhythm than most movies. For a lot of the actors, you're 12,000 miles away from home. It becomes a way of life - getting up at five in the morning, shooting every day, day in day out, for 270 days. The new cast playing the dwarves were carrying incredibly heavy weights in their suits, they sat through hours of make-up every day. So it's quite challenging from a stamina point of view."

Q: Playing Gollum was not your only job. You were also doing second unit directing. What did that entail?

A: "Directing was my main job this time - more than playing Gollum. I worked 200 days with a huge team shooting battle sequences, aerials. It was an amazing experience and one which I was very, very thankful to Peter for asking me to do."

Q: How did that come about?

A: "I'd already started directing short films when we were doing 'Lord of the Rings,' then videogame projects. So Peter's known that I've been heading towards directing for a long time. But I always thought my first outing would be a couple of people and a digital camera in the back streets of London somewhere!"

Q: Why do you think Peter let you do it?

A: "I think because the second unit was going to have a lot of principal cast, Peter wanted someone that could take care of the performances and create an atmosphere where the actors felt safe. Obviously I was briefed closely by Peter. But it was a huge challenge - mental, technological. I'd never shot with 3D. Plus the day to day logistics of dealing with such an enormous operation."

Q: Any plans to direct again?

A: "Just before I headed off to New Zealand to work on 'The Hobbit,' I was in the process of setting up (my new company) The Imaginarium (with producer Jonathan Cavendish), which is a performance-capture studio and a development company. We are developing our own slate of film projects, one of which is George Orwell's 'Animal Farm.' It's going to be the first film that I'll be directing."

Q: Where does acting fit in to your newfound career?

A: "At the moment, my trajectory isn't to think about acting. I'm absolutely devoted to The Imaginarium, our projects and directing. And watching and enabling other actors do their thing in our studio is hugely rewarding. I expect at some point I'll probably want to go back on stage and do some theater, because I've not done theater in 10 years."

Q: With two more installments of "The Hobbit" still to come over the next few years, you'll be the voice of Gollum for fans for many more years. Are your kids proud or embarrassed when you're asked do his distinctive raspy voice?

A: "I'm probably running out of credits in terms of my kids enjoying me do the Gollum voice for others. Especially my older ones (Ruby, 14, Sonny, 12). It was cool when they were younger. But my youngest (Louie, 8) absolutely revels in it. He would have me do it all day long for his friends at school. So I still have great currency there!"