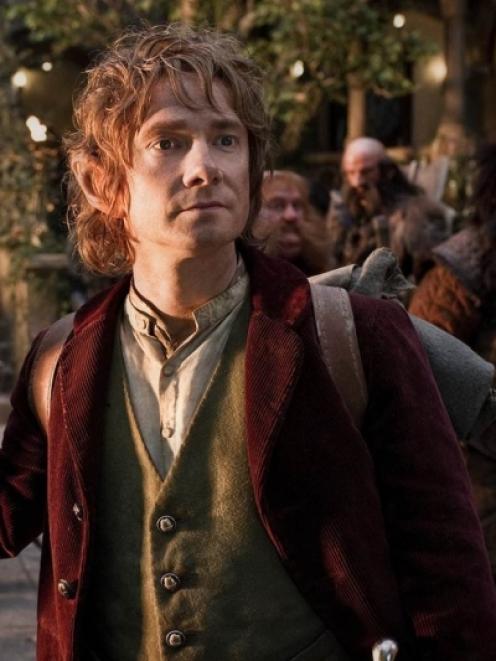 British actor Martin Freeman stars as Bilbo Baggins in The Hobbit: An Unexpected Journey. Photo supplied.
Fire up your foot-long clay  pipes, lean back, smile and breathe a sigh of relief, good people of the Shire, for the first instalment of The Hobbit is a hit. For the most part.

This has been a truly unexpected five-year journey, starring pre-production limbo, a change of director, legal disputes, studio bankruptcy, government moves to keep production Kiwi, illness, the secret travelling circus for location shooting, the rebuilding of Hobbiton, the stretch of a short children's book into three movies, the welfare of four-legged ''background artists'', a faster frame-rate, a world premiere, Air New Zealand's flying billboard, the staking of the country's international tourism strategy and now the weight of expectation heavier than all the gold in Erebor.

So now with The Hobbit playing in every cinema near you for the foreseeable future, let the smoke clear from Gandalf the Grey's fireworks and let's see if it is a good film.

Martin Freeman, the master of the baffled reaction, is perfectly cast as Bilbo Baggins, who is swept out of his comfort zone by Gandalf (McKellen), without much in the way of reason, to help a bloated cast of 13 comical dwarves led by steely-eyed Thorin Oakenshield (Armitage) on their quest to reclaim their kingdom from fire-belching dragon Smaug.

There's a sense of Jackson getting the band back together and a sheer delight in seeing all those familiar characters back on the big screen.

A decade since The Return of the King is a long time in computer-generated imagery and the frequent battle sequences are suitably massive and hyper-paced and exploit the advantages of 3-D to the hilt, with physics-defying camera swoops last seen in the Jackson-produced Tintin.

However, this first part of a new trilogy is hindered by the need to set up so many of J. R. R. Tolkien's characters and scenarios for a later payoff.

Ian Holm, as the elder Baggins in The Lord of the Rings set 60 years later, shockingly changes for a split-second into a demon possessed when he takes one look at the One Ring hanging around Frodo's neck.

It's that battle for Bilbo's soul, touched upon in his war of riddles with Gollum, that makes for the engrossing drama missing from An Unexpected Journey, and that's why we trust the best of The Hobbit is yet to come in The Desolation of Smaug and There and Back Again.