Prince William has visited the little girl badly injured in the Christchurch mosque shootings as part of his two-day visit to New Zealand.

The Duke of Cambridge is in the country as a show of royal support for victims of the terror attacks on two mosques on March 15, in which 50 people were killed and about 40 more injured.

The Duke of Cambridge meets five year old Alen Alsati, who is recovering in Starship Children’s Hospital in Auckland after being injured in the Christchurch mosques terrorist attack.Alen woke from a coma earlier this week after suffering critical injuries in the attack. pic.twitter.com/XcNAsIw7xt— Kensington Palace (@KensingtonRoyal) April 25, 2019

Earlier this week, it was reported that Alen Alsati (4) had woken from a coma and began talking again.

She has brain damage and had been unable to speak, see or eat by herself after being shot several times at the Al Noor mosque during Friday prayers.

Prince William visited her in Auckland's Starship hospital today. Her father Wasseim Alsati, who was also injured, is recovering at another Auckland hospital.

William also travelled to Christchurch after an Anzac Day service in Auckland and met with first responders to the terror attacks at the Justice and Emergency Services Precinct late this afternoon. 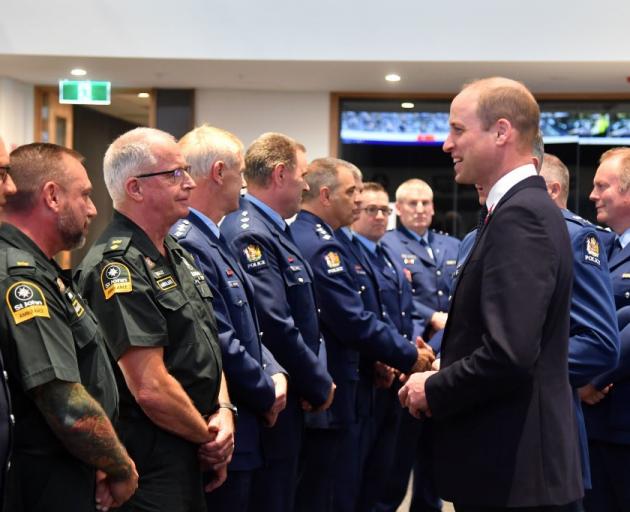 Prince William met with first responders to the mosque attacks including St John ambulance staff and police soon after arriving in Christchurch on Thursday. Photo: Reuters
Tomorrow morning, the prince will visit Christchurch Hospital and Masjid Al Noor, where the shootings began, and in the afternoon go to the second attack site, the Linwood Masjid.

Mustafa Boztas, who was shot in the leg at Al Noor and was discharged from hospital this week, hopes to meet William this afternoon.

"I'm looking forward to meeting Prince William and the Prime Minister. It's good to see him support us," Boztas said.

Later, William will lay a wreath at the Oi Manawa Canterbury Earthquake National Memorial beside the Avon River near Montreal St.  That will be followed by a short walkabout at the area set aside for reflection on the other side of the river.

Two sections of Christchurch roads near the earthquake memorial will be closed from 2pm to 6pm for the visit: Montreal St between Tuam and Cashel Sts, and Cambridge Tce between Rolleston Ave and Cashel St. 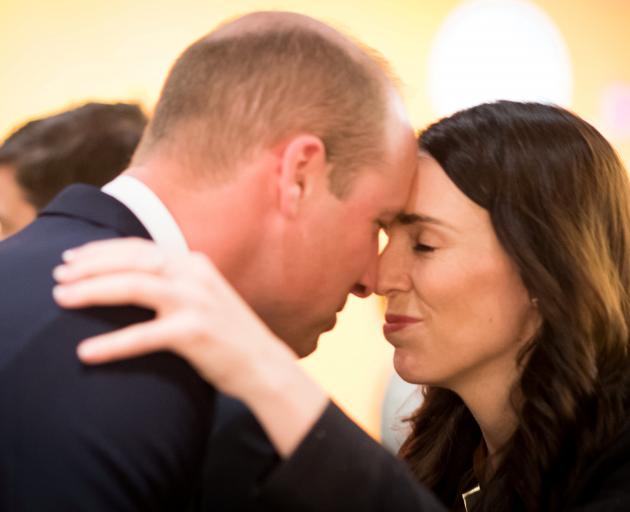 Prince William is welcomed by Prime Minister Jacinda Ardern with a hongi, a traditional Maori greeting. Photo: NZ Government via Reuters
William has strong ties to New Zealand and visited Christchurch soon after the devastating February 2011 earthquake. He and wife Kate, the Duchess of Cambridge, visited the city on their New Zealand tour in April 2014.

The prince and several other members of the royal family said in a statement following the March 15 shootings: "We have all been fortunate to spend time in Christchurch and have felt the warm, open-hearted and generous spirit that is core to its remarkable people.

"No person should ever have to fear attending a sacred place of worship." 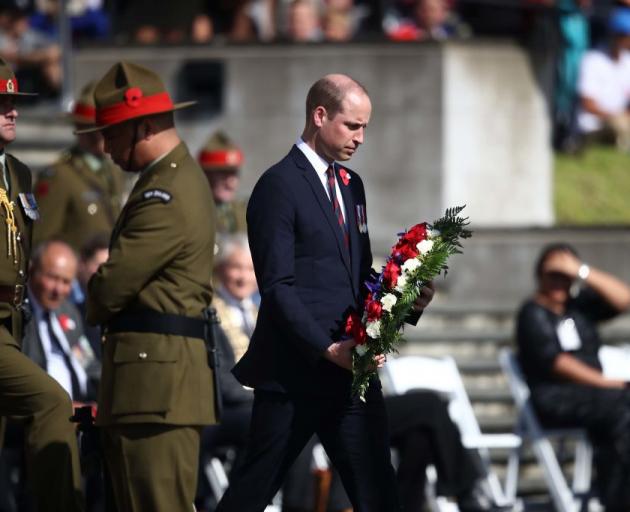 Prince William, Duke of Cambridge lays a wreath as he attends a service at the Auckland War Memorial. Photo: Getty Images

At an Anzac Day service in Auckland this morning William laid a wreath an the Cenotaph on behalf of his grandmother, the Queen.

He was accompanied by Prime Minister Jacinda Ardern and Auckland Mayor Phil Goff as he arrived for the service at 11am. Ardern and Goff also placed wreaths.

A crowd that looked slightly smaller than at the Dawn Service stood silently as William walked down the steps of the Auckland War Memorial Museum with Ardern and the rest of the official party.

They shall grow not old, as we that are left grow old;Age shall not weary them, nor the years condemn.At the going down of the sun and in the morning,We will remember them.#AnzacDay #LestWeForget pic.twitter.com/Yjs0ZjLuiF— Kensington Palace (@KensingtonRoyal) April 25, 2019

Anzac Day commemorates the bloody battle on the Gallipoli peninsula in Turkey during World War 1. On April 25, 1915, thousands of troops from the Australian and New Zealand Army Corps were among a larger Allied force that landed on the narrow beaches of the Gallipoli peninsula, an ill-fated campaign that would claim more than 130,000 lives.

While the Gallipoli campaign against the Turks failed, the landing date of April 25 has become a major day of remembrance in New Zealand and Australia for their troops killed in all military conflicts. 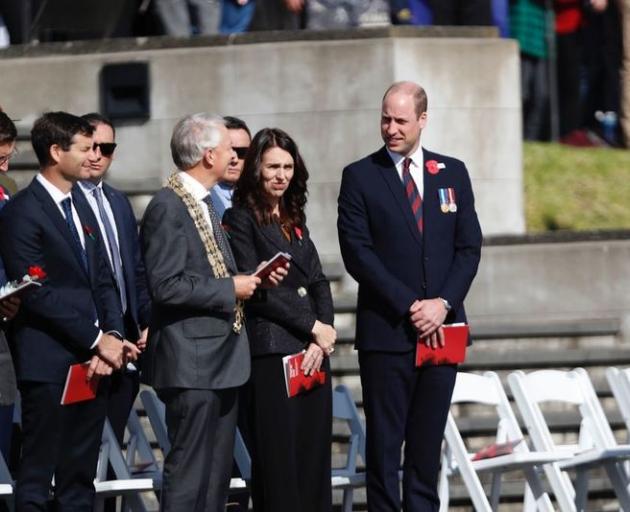 "Let us recommit to always remembering our shared humanity that there is more that unites us than divides us.

"Our sense of independence is as strong as our sense of responsibility to each other and not just as nation states but as human beings. That is part of the Anzac legacy."

Security was very heavy. Armed police guarded the approaches to the service and security staff are standing with their backs to William and scanning the crowd in all directions.

Some people attended this morning's Dawn Service and stayed to see Prince William.

Audrey Tolua, who is visiting from Napier with her niece and nephew, toured the museum after the early service and decided to stay.

Remuera West Scouts John and Daniel Hayes, who marched with other scouts at the Newmarket service at 9am, got prime spots on the museum steps.