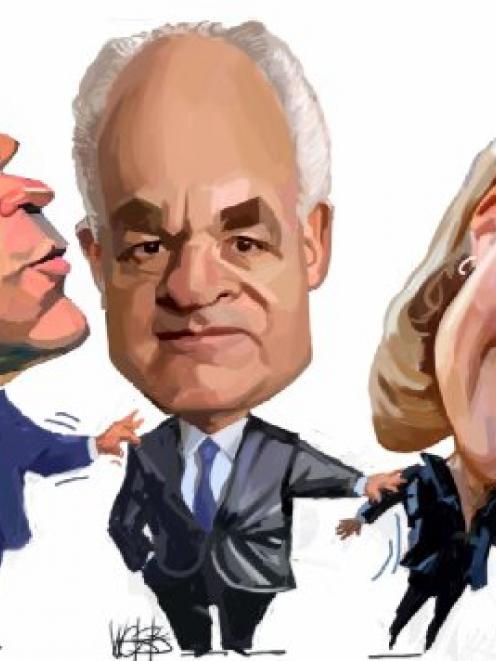 So Rodney Hide ended the most calamitous week in his party's history having won (at least for the time being) the debilitating power struggle that has been consuming the Act New Zealand caucus and the wider party for months.

But at dreadful cost.

This is the most pyrrhic of victories - a variant on the old Vietnam War adage of having to destroy the village in order to save it.

In conspiring to oust Heather Roy from the deputy leadership, Mr Hide may well have destroyed Act not only as a parliamentary force, but also wrecked its capacity to resurrect itself if deprived of a parliamentary platform and the attendant taxpayer-provided resources.

Perversely, Mr Hide could cling on to his seat in Parliament, but even that is starting to look doubtful.

And, even if he did, Act would likely be relegated to the status of a cult-of-personality party, much like Peter Dunne's United Future.

Some would argue that has already begun to happen - and that Mr Hide's taking over the leadership from Richard Prebble was what prompted the Deborah Coddingtons and the Stephen Franks of this world to leave and the Roys and Douglases who stayed on to wage internecine warfare against the new leader.

That was the only way of getting at the real target, Simon Ewing-Jarvie, her political adviser.

Mr Hide went as far on Thursday as to say the former army officer had an "undue influence" on Mrs Roy and her portfolios.

From all accounts, that is an understatement.

While Mrs Roy was sent home on two weeks' leave after being deposed at Tuesday's caucus meeting, Mr Ewing-Jarvie was sacked and marched off Act's floor in Bowen House, the party's parliamentary headquarters.

What must have been a moment of catharsis for Mr Hide was ruined, however, by the truly awful handling of the announcement of the change in deputy.

The puzzle is why Mr Hide did not explain what had really been going on, rather than turning his post-caucus press conference into farce by joining with his new deputy, John Boscawen, in pretending that dumping your deputy leader is nothing out of the ordinary.

Mr Hide may have even garnered some sympathy for his plight.

He would have held the political initiative.

The absence of any media strategy instead left a vacuum which was amply filled by the leaking to The New Zealand Herald and TV3 of Mrs Roy's 82-page dossier prepared for the defence of her position at Tuesday's caucus meeting.

The dossier reveals Mrs Roy had long lost respect for Mr Hide, having bitten her tongue during his Dancing with the Stars-induced rebirth as Modern Urban Man.

Since then their relationship has been on a par with two great white sharks circling one another.

Despite Mr Hide's protestations to the contrary and Mrs Roy's assurances this week that the pair can put things behind them, the dossier's contents suggest this will take months, if not years, if ever.

As Labour's trials and tribulations with Chris Carter attest, once an MP is severely at odds with the party leadership, the infighting resumes at some point in ever more bitter fashion.

New Zealand politics is writ large with the rebels, the outcasts and the mavericks.

They have only two options.

They either sit quietly stewing and slowly wasting away on the back benches or they stir up trouble for whoever demoted them.

Two factors militate against that happening in Mrs Roy's case.

First, she like all Act MPs is dependent on Mr Hide's holding on to Epsom. That is a source of huge frustration for her.

However, her priority now is to preserve a high position on the Act list.

Further destabilising Mr Hide will only make her enemies lobby even harder to push her down the list.

The other factor is Sir Roger Douglas - who voted for her to remain the deputy leader and who clearly has her ear.

He has acted as an intermediary and presumably helped persuade Mrs Roy to sit down with Mr Hide for the television cameras on Wednesday evening in what was a belated attempt to portray some unity and stem the deluge of highly negative media coverage.

One Labour MP likened the icy body language between the pair to that in photographs of Prince Charles and Princess Diana in the latter stages of their marriage.

What it told you was that feelings are just too raw right now - especially for Mrs Roy - to be making any decisions about staying, going or helping.

Act members and fellow travellers will be quicker in determining what to do.

The party's relative success in 2008 in increasing the size of its caucus from two to five MPs disguised the slow but noticeable decline in membership.

The venue for the annual conference has been getting smaller each year.

Delegates at this year's conference in Wellington were markedly older than during the halcyon days of the 1990s and early 2000s.

Though motivated by self-interest, the dossier prepared for Mrs Roy's defence - quite possibly written by Mr Ewing-Jarvie - is very neutral in its sobering assessment of the party's perilous position, and that Mr Hide's moving against her will accentuate the slump in support and many party members will quit, while funding by major business donors will dry up.

For many members, the attraction of Act has been as the party of ideas and ideals, not personality.

Or the kind of pragmatism that many members see as compromising too much in National's favour.

At the party's annual conference this year, both Mrs Roy and Sir Roger argued strongly for Act to get out of the shadow cast by National.

Mr Hide - still weakened at the time over his scandalous use of ministerial perks - appeared to listen.

He delivered stinging criticism of National's emissions trading scheme, National's endorsement of the United Nations Declaration on the Rights of Indigenous Peoples and the Waikato River treaty settlement.

Sir Roger says a new strategy, which takes on board much though not all of his wishes for Act to adopt a more independent stance, is about to be signed off.

The onus will be on Mr Hide to highlight those differences. It puts him on notice.

This week's victory may yet turn out not to be quite the triumph he thinks it is.

John Armstrong is political correspondent for The New Zealand Herald.