Key may have real trouble shrugging off this fiasco 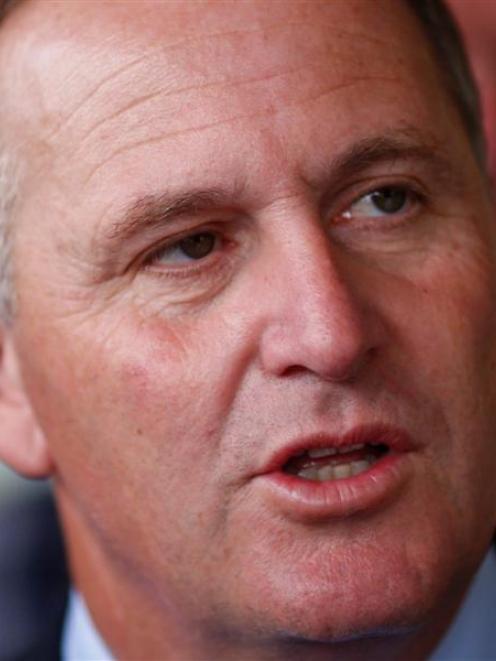 John Key.
The day is surely not far away when John Key's gift of the gab will be unable to talk him out of a political quagmire into which he has so needlessly dug himself.

Whether that day arrived this week is very much in question; suffice to say that, if not, it came perilously close to doing so.

A few belated words of contrition by Mr Key for his repeatedly causing distress to a waitress at an Auckland cafe he regularly frequents may yet prove insufficient to allow such improper behaviour to be allowed to melt away without some kind of sanction or punishment.

This time, Mr Key may have trouble shrugging off his latest calamity - real trouble.

His harassment of Amanda Bailey, the waitress in question, is a very different can of worms to the ones that have otherwise afflicted his prime ministership.

The latter have been born of administrative flaws and failings - not personal ones.

Whatever the findings of the various official and quasi-judicial agencies which Mr Key's opponents are demanding investigate his actions, his ponytail-tugging antics will end up staining his political legacy regardless.

Quite simply, there has been nothing on a par in New Zealand politics with his bizarre and grotesque hair-pulling.

The country has barely begun to come to terms with Mr Key's contribution to the theatre of the absurd, with views varying from seeing the fuss as utterly trivial to being comparable to a war crime depending on your definition of what constitutes common assault.

Such is the state of public denial that this prime minister of all prime ministers could have a foible as weird as this has people desperately trying to find the funny side in all this, hoping in the meantime that it was all a very bad dream.

As for Mr Key, he will be lucky to escape from this nightmare without his reputation being severely dented, his credibility considerably drained and his authority greatly diminished.

Looking on the bright side, the whole unseemly episode has shown Mr Key to be human after all.

And many will rejoice at that as they determine that the invective raining down on him is a massive and unwarranted overreaction by the liberal establishment.

For those who detest Mr Key, it is the last straw.

It is also the best opportunity they have had to destroy or weaken him as a political force.

Much will hinge on how willing Amanda Bailey is to make formal complaints to the authorities and seek damages accordingly.

Taking on a prime minister is something which is not for the faint-hearted, however.

With National feeling it has been struck by too many unwarranted lightning bolts lately, the party is in no mood to be mucked around.

Indeed, some on the right are already conducting a whispering campaign to try to discredit Ms Bailey by painting her as a stooge of Martyn Bradbury, who ran her mind-boggling account on his left-leaning Daily Blog of how she was constantly pestered by Mr Key.

She may feel she has put herself on the line enough in blowing the whistle on Mr Key.

She appears most reluctant to become public property.

Perhaps even more unfortunate for those out to get Mr Key, serial litigant Graham McCready has swiftly sought to gain a monopoly on court and other legal proceedings mounted against the Prime Minister.

Mr McCready is a polarising character who demands accountability from others, but not himself when it comes to wasting taxpayers' money on frivolous court actions.

His blinkered determination to control what happens on a judicial level is one reason why the major opposition parties are being very careful as to how they attack Mr Key.

One particular word had been noticeably absent from their carefully crafted public statements.

With the story still unfolding with unpredictable twists and turns, it is far too early to call for Mr Key to fall on his sword.

Saying that he should do so could be counterproductive in only succeeding in generating sympathy for Mr Key.

Better to wait until it is possible to assess on whose side - Mr Key's or Ms Bailey's - majority public opinion lies.

It has taken a while, but Labour, the Greens and New Zealand First have finally worked out that turning the public against Mr Key will not be achieved by making shrill demands that he depart Premier House once and for all every time he has a lapse in judgement.

Those parties have learned from bitter experience that calls for Mr Key to go perversely tend to have the opposite effect in consolidating support behind him.

Even Greens co-leader Metiria Turei - one of Mr Key's severest critics and someone who makes a point of coating her questions to him in Parliament in a deep layers of sarcasm - held back from insisting he step aside.

Both she and Winston Peters addressed the matter of resignation more obliquely.

They questioned how Mr Key could now punish other ministers who are guilty of misconduct when he had so obviously failed to punish or discipline himself for his own failure to meet the highest ethical standards that are expected of a Cabinet minister as set out in the Cabinet Manual.

To Mr Key's further embarrassment, his faux pas has prompted opponents to resurrect the case of Aaron Gilmore, the backbench MP who was pressured into resigning from Parliament two years ago after he abused a waiter during a dinner at the Hanmer Springs hotel.

It begs a question: what is the difference between what Mr Gilmore did and what Mr Key did to a waitress in an Auckland cafe?

None it would seem apart from the fact that Mr Gilmore was drunk and threatened to use the influence of the prime minister's office to have the waiter sacked.

Of course, there is a difference - the 50 or 60 odd rungs on the National Party's caucus ladder between a lowly backbencher who is expendable and a prime minister who has proved to be indispensable no matter his quirks.

That a prime minister - at least in the case of a National Party one - is effectively accountable to no-one bar - at the end of the day - the caucus which elects him or her as leader should be etched in block letters on the walls of the ninth floor of the Beehive as a constant reminder to the incumbent that the buck stops there when it comes to setting an example and rooting out unacceptable behaviour.