0 Comments
National have kicked "lone wolf" MP Jami-Lee Ross out of the party for his "appalling behaviour" – and say they would welcome a police inquiry into "baseless" corruption allegations.

Leader Simon Bridges said the party wanted to draw a line under the leak episode and be a united caucus going forward.

Bridges said Ross was "lying, leaking" and "lashing out" - and has welcomed police investigating the rogue MP's claims about donations to National.

He rejected Ross calling him a "corrupt" politician who was not fit to be prime minister.

Ross' expulsion from the party is a moot point given he quit the National Party today and plans to contest a Botany byelection as an independent candidate.

But Bridges said 55 MPs voted today to expel Ross - dispelling his contention that other MPs were dissatisfied with Bridges' leadership.

"The 55 people who know about this the most and the best have decided this is the right thing to do. It's the strongest possible action the caucus can take, and it's because we are united."

Bridges said Ross's allegation of corruption involving donations to the party were "baseless".

"They are entirely false and I invite Jami-Lee Ross to take them to police."

He invited police to investigate the allegations and was confident they would find no wrongdoing.

"It has zero chance of success, because it is wrong."

Bridges wouldn't say if he knew Chinese businessman Zhang Yikun and his $100,000 donation, as it was now up to police to investigate.

"This is a matter where Jami-Lee Ross has made baseless, false but serious allegations. He should take them to police... the outcome will be clear and that is I've done nothing wrong."

He did not want to elaborate on what he has previously said was a "pattern of behaviour" from Ross. "We've expelled him from caucus and I'm moving on."

Bridges would not address Ross' claim that internal polling had Bridges' favourability rating at -27.

He said he would not waste his time when asked about whether he would take legal action against Ross. 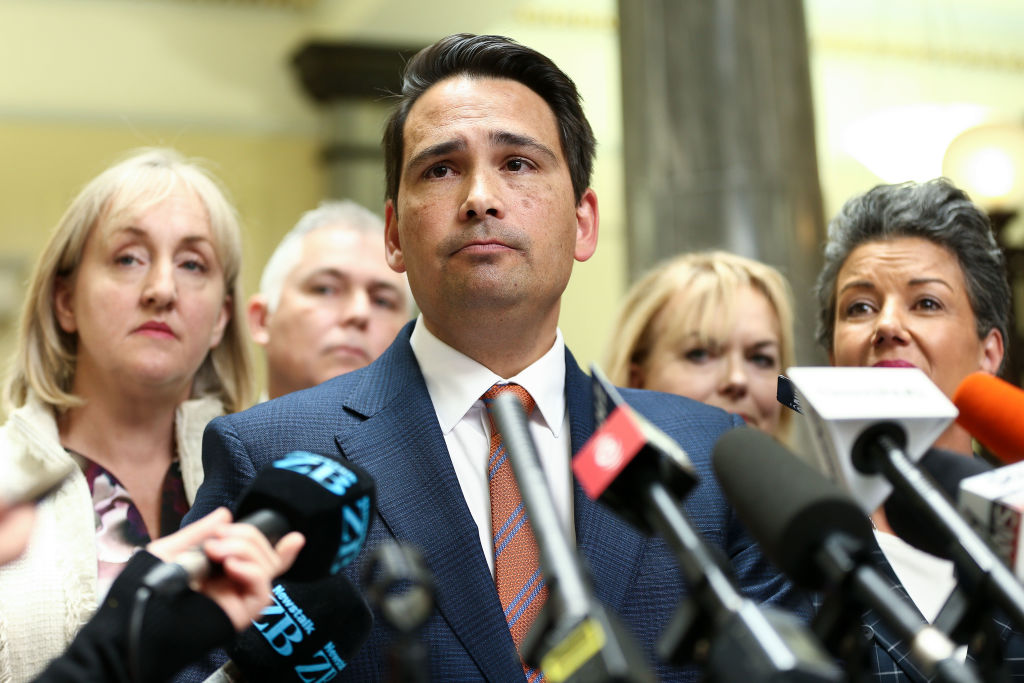 Ross had lashed out at "corrupt" Bridges, saying he will complain to police about the handling of donations made to the party.

He told reporters he plans to lay a police complaint over Bridges' handling of donations - and says he will provide a recording of a conversation with the National leader to support his complaint.

Ross also revealed that he was accused by National of harassing four women: "I was asked for details. I was not given any."

Ross said his questions were not addressed, and a week later, he went on sick leave: "It was difficult to accept, and I had a mental breakdown."

He said he was also hurt that Bridges characterised his issues as "embarrassing".

Ross said he had started to question Bridges' leadership soon after he became leader.

He also questioned the legality of some of Bridges' actions. He initially thought Bridges was prime minister material, but no longer thinks that. Ross said it was clear he has had a falling out with his leader.

"He now has a net negative favourability of -27 in internal polling... the New Zealand public are not stupid."

Ross claims that Bridges filed a false electoral return. He says Cathedral Club is a front for a friend of Bridges that he knows well.

"Filing a false return is a corrupt [practise]. Falsifying the name of a donor to hide the identity is a corrupt practice," Ross alleged.

Bridges yesterday denied any wrongdoing involving donations to the party.

Ross said Bridges asked him to collect a $100,000 donation which was then split into smaller amounts to hide it.

Ross later asked Bridges about the donation, and recorded the conversation.

Ross said he will go to police tomorrow to lay a complaint and allow them to hear the phone conversation with Bridges.

He will also release photos of Bridges with the donor, a Chinese businessman, but stressed that he did not think the businessman had done anything wrong. He named the donor as Zhang Wiyun.

The donation that he alleges is corrupt is separate from the donations that were discussed in a TV interview yesterday, he said.

Ross said the donation was made in May/June and alleged that it was covered up under instructions from Bridges.

He alleged National's MP for Rotorua, Todd McClay, was also aware of the $100,000 donation, and the party's general manager Greg Hamilton also knew about it.

However, McClay late this afternoon rejected the claims.

"These claims are baseless. I agree with Simon Bridges, Mr Ross should take this to the police and they should investigate them fully."

"This is not a matter of leadership, it's about one individual who has shown significant disloyalty to every caucus member."

McClay said the entire caucus was disappointed. "We've been working very hard over the past year. Again, this is about one person who has shown great disloyalty to caucus."

However, he didn't believe Ross' actions had caused any damage to National.

Ross said he asked to address the caucus before the report was released to media, but this was denied.

"The campaign to push me out did ramp up considerably three weeks ago," Ross said.

He said when he asked Bridges about the four women he was accused of harassing, he was told that 15 women could be found. "Simon and Paula were the judge, jury and executioners."

"I can no longer serve in a political party lead by a corrupt politician."

Ross said he will resign his National Party membership and his Botany seat.

He said his contract is with the people of Botany. "I have fought for my community."

He planned to stand as an independent candidate in the Botany byelection.

Ross said he still believed in National Party values, despite his dramatic falling out with Bridges.

"New Zealand deserves better from the National Party... I'm not proud of not speaking out until now.

"I am sad to be departing, for now, a party that has many good people."

Ross said other National MPs were also concerned about Bridges' leadership - but they were too concerned and would rally behind the leader.

He would not name other National MP who he said had had conversations questioning Bridges' leadership. The fact that he did so and was part of the inner senior team had lead to his falling out with Bridges.

Ross said that Amy Adams, Judith Collins, and Mark Mitchell - who all stood in the leadership contest - were all more capable and honest leaders than Bridges.

But it was up to the caucus to choose a leader, and he is no longer part of the caucus.

Ross said he was devastated to be accused of harassing women. His world crashed down around him and he got help.

He said he was "ambushed" and was about to lose his career and reputation. He thought long and hard about it and then asked Bridges for more information, but Bridges told him he could find not just four women, but 15 women.

"I wanted to know what the allegations were, but was never given the opportunity."

"If something has happened, I would like to know so I can fix it... I still have not been told anything."

Ross insisted he did not leak the travel expenses, but said he did leak the later text message about the leaker because he was "floored" by the lack of compassion from Bridges.

He hoped leaking the text message would trigger compassion from Bridges.

"I made a call. I thought trying to get it out publicly... would offer the person a reprieve."

Ross noted that he is addressing media while the National caucus was meeting, but what happened in that meeting no longer concerned him as he was leaving the party and stepping down from his Botany seat to force a byelection.

"The commission has not received any complaints that relate to these matters at this stage. The commission will provide assistance to the police in their inquiries."

The rules around disclosure of donations are:

• For party returns, the name and address of the donor must be reported where the donor has given more than $15,000. Party donations of more than $30,000 must be declared within 10 working days."

Senior National MP Judith Collins says Ross has displayed "delusional" behaviour - and she was "fast losing interest in him as an MP".

Collins had been a supporter and ally of Ross but today's comments reflect the fury National MPs have with their rogue colleague.

Collins told reporters on her way into Parliament she would have her say at caucus.

"The tweets yesterday and the admission of taping Simon Bridges as the leader obviously to use it against him at some stage was extraordinary and I have never in my mere 16 years in politics seen anything like it."

She described it as "delusional" behaviour, but she had never suspected it. "I was floored
by it."

Collins said she was not surprised by the strength of feeling from her caucus colleagues.

"We have a very united caucus and people are floored by this behaviour.

"I'm fast losing interest in him as an MP."

Senior MP Amy Adams said she "absolutely" had confidence in Bridges. She called Ross' tweets "extraordinary", saying she'd never seen anything like it.

"I think Simon's done an excellent job and he's got my full support."

Adams said there were questions to be asked from the report and from Ross' tweets.

When asked to assess how Bridges had handled the fallout of the investigation Ardern said she would not "sit here and rank performance".

She commented that the Labour Party had gone through its own issues during its time in opposition.