Controller blamed for US collision 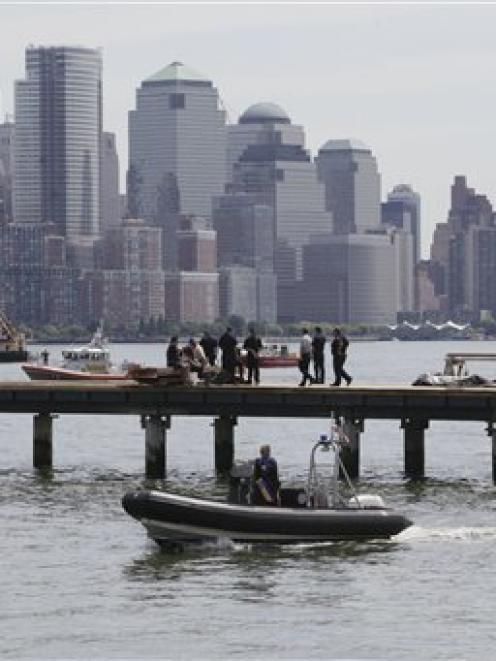 In this August 8, 2009, file photo, emergency service personnel work at the scene of a helicopter crash on the Hudson River in Hoboken, N.J. Photo by Mary Altaffer/AP.
Errors by an air traffic controller distracted by a personal phone call set the stage for a midair collision last year over New York's Hudson River between a tour helicopter and a small plane that claimed nine lives, including New Zealand helicopter pilot Jeremy Clarke, a US government safety panel says.

While the National Transportation Safety Board placed a large share of the blame for the August 8, 2009, accident on the controller, it also faulted Federal Aviation Administration rules in the busy air corridor over the Hudson between New York and New Jersey that rely on pilots to "see and avoid" other aircraft rather than be actively separated by air traffic controllers.

NTSB Chairman Deborah Hersman expressed concern that midair collisions are still occurring more than 50 years after the collision of two airliners over the Grand Canyon prompted reforms that led to the creation of the FAA and the US 's air traffic control system.

Both aircraft involved in last year's accident were equipped with a different kind of technology - traffic monitoring systems - that provide indications of the impeding collision, investigators told the board. But those indications, which can be so frequent that investigators said pilots often tune them out, were ignored or went unobserved.

Hersman said the collision was due to "a merger of missteps" that began with the controller who cleared Steven Altman's Piper Lance for takeoff. Altman, 60, requested that the controller continue to advise him of potential traffic conflicts after takeoff.

But the controller, engaged in a bantering personal phone call about a dead cat while directing traffic, was distracted and violated several procedures, investigators said. He waited more than two minutes to give Altman a new radio frequency after he handed off the plane to controllers at nearby Newark Liberty International Airport.

When the controller did relay the frequency to Altman, he spoke very rapidly, making his words difficult to understand, investigators said.

Altman read back the frequency to the controller incorrectly as 127.8 instead of 127.85. Controllers are supposed to listen to a pilot's readback of a frequency and correct it if it is wrong. However, the controller received a radio call from Newark controllers at the same moment, as well as being distracted by the personal phone call and other traffic he was handling. He did not correct - and probably didn't hear - the incorrect readback, investigators said.

As a result, Altman was probably tuned to the wrong radio frequency and could not be reached by controllers when they tried to warn him of the impending collision, investigators said.

Also killed in the accident was the helicopter's pilot, Mr Clarke, 32, who apparently could not see Altman's plane, investigators said. Mr Clarke, who had received US citizenship a month before and was due to get married, would have had to look behind his right shoulder to see it coming.

The helicopter was visible from the window of Altman's plane. But a presentation by investigators demonstrated that it would have been difficult for Altman to discern the helicopter against the background of the New York skyline until a few seconds before the accident.

Altman and his two passengers - his brother, Daniel Altman, 49, and his 16-year-old son, Douglas - were killed in the collision. Also killed were Clark and five tourists from the Bologna area of Italy: Michele Norelli, 51; his son Filippo Norelli, 16; Fabio Gallazzi, 49; his wife, Tiziana Pedroni, 44; and their son Giacomo Gallazzi, 15.