Emergency crews attend the scene of an alleged shooting incident on West Street in Manhattan. Photo: Reuters
An Uzbek immigrant accused of killing eight people in New York City by driving a rental truck down a riverfront bike pathappeared to have acted alone, but the Halloween Day attack had all the hallmarks of terrorism, authorities say.

The 29-year-old suspect, who was shot by police and arrested moments after Tuesday's rampage on the Lower West Side of Manhattan, left a note saying he carried out the attack in the name of the militant Islamic State group, the New York Times and CNN reported.

New York City Police Commissioner James O'Neill declined to publicly identify the driver, but a source familiar with the investigation said he was  Sayfullo Saipov.

He reportedly lived in Paterson, New Jersey, about 40km northwest of lower Manhattan. He had rented the pick-up from a Home Depot hardware store which, according to media accounts, was located in Passaic, just south of Paterson.

Many media outlets, cited police officials as saying that the man shouted: "Allahu Akbar" - Arabic for "God is greatest" - when he jumped out of his truck.

A video posted to social media shows bodies and bicycles on a bicycle path near Chambers St and West St by Stuyvesant High School. Some people were being treated for injuries near a mangled school bus, the New York Times reported.

Uzbekistan said it was investigating reports that the suspect was a citizen of the Central Asian nation, an Uzbek Foreign Ministry official told reporters on Wednesday.

Tuesday's death toll paled in comparison to dozens killed in similar assaults last year in France and Germany. However, it was still the bloodiest single attack on New Yorkers since Sept. 11, 2001, when suicide hijackers crashed two jetliners into the World Trade Center, killing more than 2600 people.

The Twin Towers site was just a few blocks from the scene of the carnage left when the suspect swerved the pickup onto a path filled with pedestrians and bicyclists on a sunny, autumn afternoon.

Driving at speeds estimated at more 100km/h, the vehicle mowed down everyone in its path before slamming into the side of a school bus.

The man then climbed out of the vehicle brandishing what appeared to be a pair of handguns before he was confronted by a police officer, who shot him in the abdomen. Police said they recovered a paint-ball gun and a pellet gun from the scene.

The attack was over in a matter of seconds. Video footage taken by a bystander that circulated online showed crumpled bicycles scattered long the path, and at least two people lying on the ground.

In addition to the eight deaths, at least 11 people were hospitalised for injuries described by fire officials as serious but not life-threatening. That excluded the suspect, who underwent surgery for gunshot wounds.

The attack, on the far west side of lower Manhattan, was reminiscent of several deadly vehicle attacks in Europe during the past 15 months.

"This was an act of terror, and a particularly cowardly act of terror, aimed at innocent civilians, aimed at people going about their lives who had no idea what was about to hit them," Mayor Bill de Blasio told a news conference following the attack.

The truck crashed into a school bus on Tuesday afternoon (local time). Image: Sebastian Sobczak on social media via Reuters

Six victims were pronounced dead at the scene and two more at a nearby hospital, Police Commissioner O'Neill said.

Five of the dead were Argentine citizens, visiting New York as part of a group of friends celebrating the 30th anniversary of their high school graduation, the Argentina Foreign Ministry said in a statement. Belgium's foreign minister said a Belgian citizen was also among those killed.

A US law enforcement official described the suspect as a US immigrant born in Uzbekistan, a landlocked, predominantly Muslim country in central Asia that was once part of the former Soviet Union. CNN and NBC News reported that he entered the United States in 2010.

Authorities late on Tuesday surrounded a house in Paterson where, according to the New York Times, Saipov was believed to have lived. Paterson, known for its large immigrant population, is home to about 150,000 people, including 25,000 to 30,000 Muslims.

ABC News reported that Saipov had lived in Tampa, Florida. A check of court records related to a traffic citation that Saipov received in eastern Pennsylvania in 2015 showed he listed addresses then in Paterson and Cuyahoga Falls, Ohio.

Although authorities from the mayor's office to the US Department of Homeland Security all swiftly branded the attack an act of terrorism, Governor Andrew Cuomo stressed that the suspect was believed to have acted alone.

"There's no evidence to suggest a wider plot or a wider scheme. These are the actions of one individual meant to cause pain and harm and probably death," Cuomo told a news conference two hours after the rampage.

Asked later in a CNN interview whether the suspect had been known to authorities before the attack, Cuomo replied: "It's too early to give you a definitive answer."

The New York Times said investigators quickly recognised that Saipov had come to the attention of law enforcement in the past. It cited three officials as saying federal authorities knew of Saipov from an unrelated probe, although it was unclear whether that was because he had ties to someone who was under scrutiny or because he was the target of an investigation. 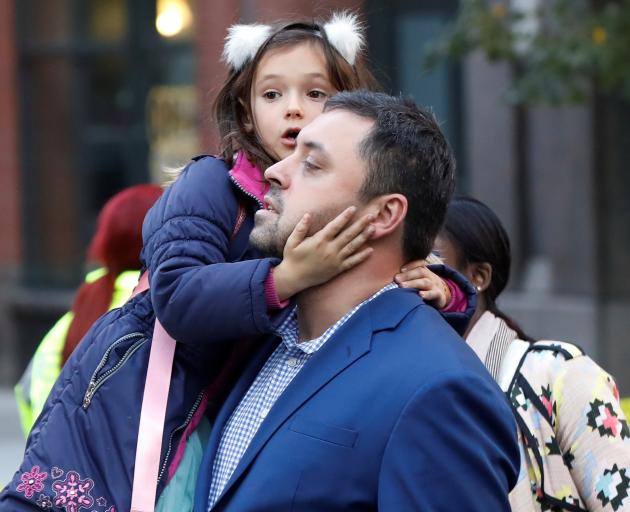 The attack happened near the P.S./I.S.-89 school. Photo: Reuters

The Federal Bureau of Investigation joined the New York City Police Department and other agencies in a Joint Terrorism Task Force to conduct a probe of the attack, the FBI said in a statement.

Despite the attack, thousands of costumed Halloween revelers turned out hours later for New York City's main Halloween parade, which went on as scheduled on Tuesday night with a heightened police presence just a few blocks away.

US President Donald Trump, who has pressed for a ban on travelers entering the United States from some predominantly Muslim countries, said on Twitter that he had ordered Homeland Security officials to "step up our already Extreme Vetting Program. Being politically correct is fine, but not for this!"

In an official White House statement later, Trump said: "Our thoughts and prayers are with the victims of today's terrorist attack in New York City and their families."

He also paid tribute to the "first responders who stopped the suspect and rendered immediate aid to the victims."

On July 14, 2016, a suspect drove a large truck into a crowd celebrating Bastille Day in the French city of Nice, killing 86 people and injuring hundreds more in an attack for which Islamic State claimed responsibility.

Five months later a Tunisian asylum seeker, who had pledged allegiance to Islamic State, plowed a truck into a crowded Christmas market in central Berlin, killing 12 people and injuring 48.

On August 17 of this year, a driver rammed his van into crowds in the heart of Barcelona, killing 13 people, in an attack authorities said was carried out by suspected Islamist militants.